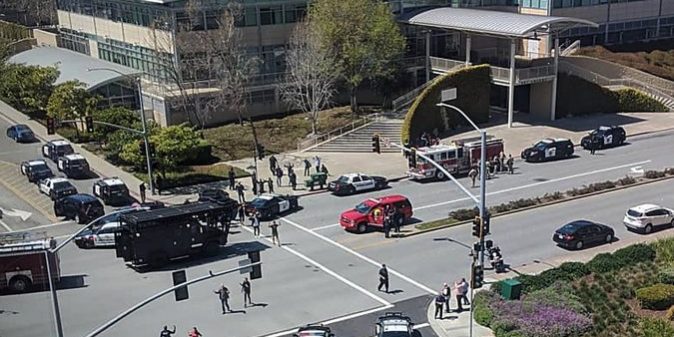 1. At least four people were wounded, one of them critically, in a shooting at YouTube’s headquarters in San Bruno, Calif., above. The shooter, who the police said was a woman, died, apparently from a self-inflicted gunshot wound.

One employee tweeted that he had “heard shots and saw people running while at my desk.” He said that he was barricaded inside a room with co-workers, but moments later tweeted that he had been safely evacuated. Footage from the scene showed people being led away from the building with their hands in the air in a single-file line.

Check back for updates on this developing story.

2. “We’re going to be guarding our border with the military.”

President Trump said he’d order troops to guard the southern border until he can build a wall and tighten immigration restrictions. He made the announcement alongside Defense Secretary Jim Mattis, at a meeting with visiting leaders of Baltic nations, above.

It wasn’t immediately clear how he’d carry that out, though. The active-duty military is generally barred by law from domestic law enforcement duties, though previous administrations have deployed the National Guard in support roles on the border.

We fact-checked the president’s recent claims about immigration, and our reporter in Mexico City has more on the immigrant caravans making headlines this week.

3. Alex van der Zwaan, above, became the first person sentenced in the investigation into Russia’s interference in the 2016 election.

The 33-year-old Dutch citizen used to be a lawyer for the powerful firm Skadden Arps. (He’s also the son-in-law of a Russian billionaire.)

He had faced up to five years in prison for deceiving investigators who were examining links between key figures in the Trump campaign and a Ukrainian businessman. He was sentenced to 30 days in prison and fined $20,000.

4. It was Spotify day: The company that disrupted the music business made its highly anticipated debut on the New York Stock Exchange. The share price closed at $149.01, giving Spotify a market value similar to that of companies like M&T Bank and General Mills.

There was one snafu, though: The exchange flew a Swiss flag in honor of the deal. Spotify’s headquarters are in Sweden.

We remember him and the battles that outlived him: workers rights, a sprawling protest movement, persistent segregation and poverty.

The Times obituary celebrated him as a prophet in the crusade for racial equality and a voice for millions of African-Americans. “He was their voice of anguish,” it reads, “their eloquence in humiliation, their battle cry for human dignity.”

6. Alarming evidence and testimony at a federal civil rights trial in Mississippi is allowing a rare glimpse into the world of private prisons.

The case was filed after years of complaints from inmates over dangerous conditions and extraordinary violence and neglect. We obtained surveillance footage, above, showing inmates beating a fellow inmate, with no response from guards for half an hour.

The number of inmates in private facilities is increasing around the country, and the Trump administration has indicated that it will expand their use.

7. Hillary Clinton’s loss in the 2016 presidential election prompted a surge of Democratic women not only to run for office, but also to manage campaigns.

With a seat at the head of the table, staff members like Emma Brown, above, are responsible for strategy, message, staff and creating networks for future campaigns.

They have the potential to reshape a profession long dominated by men. This year, 40 percent of the campaign managers for Democratic congressional candidates are women, and the numbers are up for Republican candidates too.

8. Just one day after he announced it on live TV, Prime Minister Benjamin Netanyahu of Israel reneged on a deal with the U.N. to resettle African asylum seekers in Western countries. Above, a protest outside of Mr. Netanyahu’s office in Jerusalem.

The deal would have allowed thousands of recent migrants from Eritrea and Sudan, who cannot be returned to their own countries under international law, to remain in Israel. An equal number were to be resettled in Western countries.

Mr. Netanyahu’s about-face came after an outcry from anti-immigration hard-liners, and it dented his image as a master political player.

9. India’s jeweler to the stars is on the run.

Nirav Modi, seen above last year, had attained wealth and fame in a few short years. Kate Winslet, Taraji P. Henson and other celebrities wore his designs, and he rubbed elbows with British royalty and Donald Trump Jr. He disappeared after being accused of building his global empire through fraudulent bank transactions.

The case has captivated and enraged India, reinforcing the notion that taxpayer-owned banks are footing the bill for the lavish lifestyles of a rising elite.

Separately, less than a day after announcing penalties for journalists who write or broadcast “fake news,” the office of Prime Minister Narendra Modi (no relation) withdrew them.

“It takes even longer after you realize that there isn’t one perfect beef stew, but constellations of them,” she adds. Her trick? Cook it low and slow, preferably in an oven. (Feel free to go straight to the recipe.)

“At this point, he’s just messing with us,” Jimmy Kimmel joked. “I mean, he might as well declare it National Bankrupt Casino Awareness Month.”