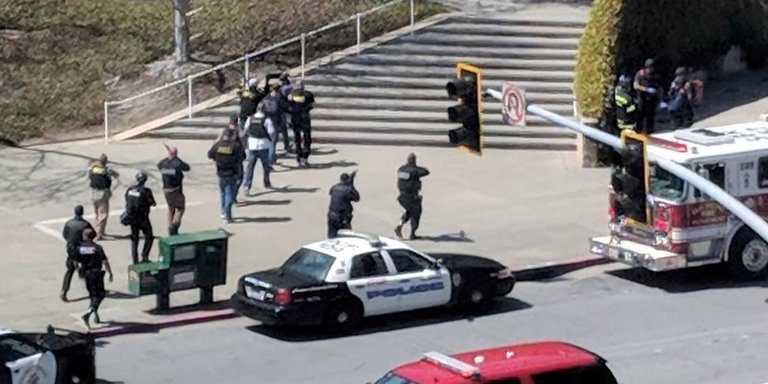 Police descended on the headquarters of YouTube on Tuesday afternoon after reports of an active shooter at the building in San Bruno, Calif.

Images of the scene and accounts of the terrifying moments experienced by those inside immediately began spreading online. Authorities said they believed a female shooter had died of a self-inflicted gunshot wound. At least four others were injured.

Read the latest updates in our live briefing »

What we know happened at YouTube’s headquarters

• The police who searched the building discovered the body of a female who they believe to be the shooter. She had apparently killed herself, according to Ed Barberini, chief of the San Bruno Police Department. He said there was no information to indicate there was another shooter.

• The police reported that four victims were transported from the scene. San Francisco General said it had received three victims, including a man in critical condition.

• The police reported an active shooter in the area of YouTube’s headquarters in San Bruno — just south of San Francisco — around 1:30 p.m. local time. The building was quickly surrounded by police vehicles and heavily armed officers entered the building. Video from the scene showed employees leaving the building with their hands in the air.

• YouTube employees began posting about a shooting almost immediately, including one who said he had heard gunshots and barricaded himself in a room with his co-workers.

• The F.B.I. said it was monitoring the situation and the Bureau of Alcohol, Tobacco, Firearms and Explosives said it was also responding to the scene.