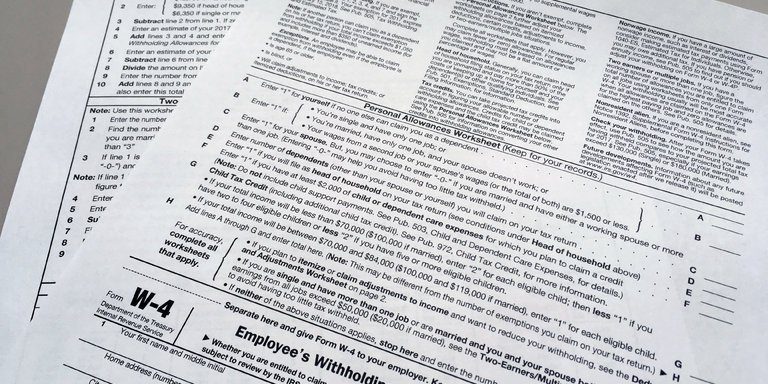 The Internal Revenue Service is urging taxpayers to do a “paycheck checkup” to make sure they are having their employers withhold the correct amount of taxes.

It’s generally advisable to check your withholding from year to year, or when you have a significant life change, like getting married or divorced. But it’s especially important this year, the I.R.S. said, given changes in the tax code after the Tax Cuts and Jobs Act was approved last year.

The law changed tax rates and brackets and limited or ended certain deductions. It also increased the standard deduction, which reduces your taxable income without your having to itemize deductions on your return. In addition, the law removed personal exemptions and increased the child tax credit. The upshot is that you may need to adjust the amount of tax withheld from your paycheck.

“People’s withholdings under the old law may not be appropriate for them now,” said David Walters, a certified public accountant with Palisades Hudson Financial Group in Portland, Ore. Reviewing your withholdings, he said, is “more important than usual because of the new tax law changes.”

Having too little tax withheld could mean an unpleasant surprise in the form of a larger tax bill — and possibly a penalty — when you file your tax return in 2019. Or you could have more withheld than necessary, resulting in smaller paychecks, and a large refund next year.

“There are so many changes, it could go either way,” Mr. Walters said. “But the message is, you probably want to check.”

Sooner is better than later, he said. Since we are now three months into the year, there are fewer pay periods remaining in which to make adjustments.

Those who should make a special effort to review their withholdings, the I.R.S. said, include two-income families, people with children, people who itemized deductions in 2017 and people who had either large tax bills or large refunds in 2017.

The I.R.S. has updated its online withholding calculator to help with the review.

The calculator allows taxpayers to estimate their 2018 income tax, and compare the amount with their current tax withholding, to help them decide if they need to have more or less money withheld from their paycheck.

“It’s kind of a handy little thing,” said Cindy Hockenberry, director of tax research and government relations with the National Association of Tax Professionals. Ms. Hockenberry said she had tried the tool and found it “pretty accurate” for her situation.

People who were getting a significant refund before the tax law changes should consider whether they could end up with an even larger one if they don’t revise their paycheck withholdings, she said. The I.R.S. says the average refund last year was just over $2,800.

“That’s a good chunk of money,” Ms. Hockenberry said. Many people might prefer to reduce their tax withholdings, she said, and take home more cash in their paycheck for living expenses.

The I.R.S. advises that people with particularly complex tax situations — including those owing self-employment tax or the alternative minimum tax, or those who have capital gains and dividends — may need to consult Publication 505, Tax Withholding and Estimated Tax, to check their withholdings instead of using the online calculator. The publication is expected to be updated in “early spring,” the I.R.S. said.

It may be wise, Mr. Walters said, for those taxpayers to consult a tax professional to make sure they are on track with proper withholdings.

Here are some questions and answers about checking your paycheck withholdings:

What documents do I need to use the I.R.S. withholding calculator?

Before you start, have handy a copy of your current pay stub and your most recent federal income tax return — ideally, your 2017 return, the I.R.S. says. That will help you answer the questions. The calculator asks questions like how often you receive paychecks, how much has been withheld in taxes already this year and whether you contribute to a 401(k) plan. (You don’t have to enter your name or other personally identifiable information to use the tool, and the I.R.S. says it doesn’t save the information entered on the calculator.)

How do I make changes to my paycheck withholding?

Fill out a new I.R.S. Form W-4, using data provided by the calculator, and give it to your payroll office or human resources department.

“You submit it to your employer, not the I.R.S.,” Ms. Hockenberry said. You filled out a W-4 form when you were hired, but you may not have given it a thought since.

Some commercial preparers and tax software providers, including TurboTax and H & R Block, offer free online withholding calculators that have been updated for 2018.