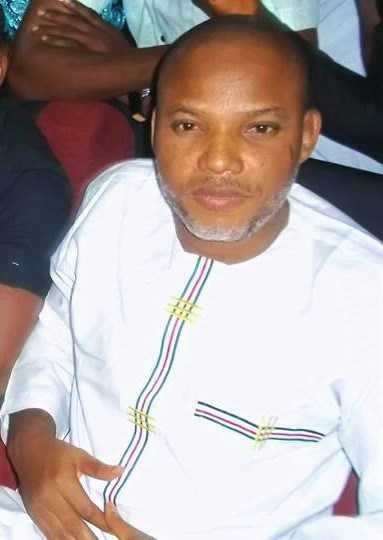 The Leader of  Indigenous People of Biafra and Director of Radio Biafra/Biafra Television Citizen Nnamdi Kanu was arraigned in Federal High Court Abuja on the 7th of March 2016, following an adjournment which was made on the 19th of February by Justice John Tsoho. Citizen Nnamdi Kanu told Ibeh Gift Amarachi and Prince Ugochukwu Olisakwe of Family Writers after Justice John Tsoho made contradicting and barbaric rulings of secret trial and masked witnesses and in his statement 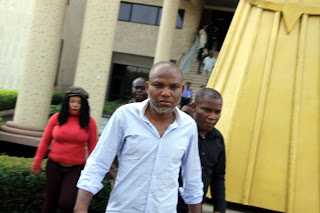 “YOU CAN NOT ACCUSE ME PUBLICLY AND TRIAL ME SECRETLY. THE PROSECUTORS ACCUSED ME FOR TREASON AND OTHER CHARGES TO THE AWARENESS OF NOT JUST THE COURT BUT THE WORLD AT LARGE AND THEN DECIDED TO SEEK FOR A SECRET TRIAL. TO TELL YOU, I HAVE NO CONFIDENCE IN NIGERIA JUDICIARY”.

It is not just necessary but important not to hurriedly forget that on the 19th of February 2016, the prosecuting counsel David Kaswe passed a motion for a secret trial, which was objected by the defending counsel San Chucks Muoma and in his counter statement ” My Lord, the face of a witness should be seen, because through the twitching of their eyes, nose and body movement, one can predict if they are telling lies or otherwise. The witnesses claim to be threatened without the court knowing or the defendant knowing who they are, how then can anyone have their phone numbers to use in passing a threat to them as claimed by the prosecuting counsel? If they seek for protection, then what about the defending counsels, are we the ones who don’t need safety? The Rabbit said, kill me the way you killed others. A masked witness should not stand against my client, after his public accusations. This trial has been open and should continue that way”.

The secret trial and masked face witnesses was struck out by Justice John Tsoho and in his ruling ” I see no reason why the faces of the witnesses should be masked. I don’t accept the claims of the witnesses for not coming to testify, due to security reasons. The security agents in Nigeria are capable of securing their lives on that note I strike off a secret trial. The Court trials will be open to, members of the press and those in the court”. This same Judge who struck out the secret trial, jeopardized not just his career but Nigeria Judiciary at large by reversing his previous ruling and granting a secret trial.

To tell you I concur with the leader of the Indigenous People of Biafra Citizen Nnamdi Kanu who demands for an open trial, because anyone calling for a secret trial to me is a vagabond and hypocrite. Why moving towards secrecy, if you know you are telling the truth? The Creator of the Universe through the Bible spoke against Secret trial. Acts 25:16  “To whom I answered, It is not the manner of the Romans to deliver any man to die, before that he which is accused have the accusers face to face, and have licence to answer for himself concerning the crime laid against him. God is against a secret trial,because he is a Truthful and transparent Supernatural being.

If a witness who claims to be aware of an incident and is ready to testify of what he or she knows about a case, why then pleading for secrecy? No member of the Indigenous People Of Biafra know who they are and not even their numbers, hence for the prosecuting counsel to state in the Court that the presumed witnesses are been threatened on phone by the Indigenous People of Biafra is total fallacy and a slap on the face of Truth. The World should understand that, Nigeria Judiciary is dead and in jeopardy,this i stated in one of my writeups and the Puppet Justice John Tsoho,have not just proven to be a Puppet,but exposed the barbaric state of the Nigeria Judiciary. The Human Right Of Citizen Kanu has been violated incessantly and the World must not only take note,but also rise up and take drastic measures against this obvious injustice and human right violation.