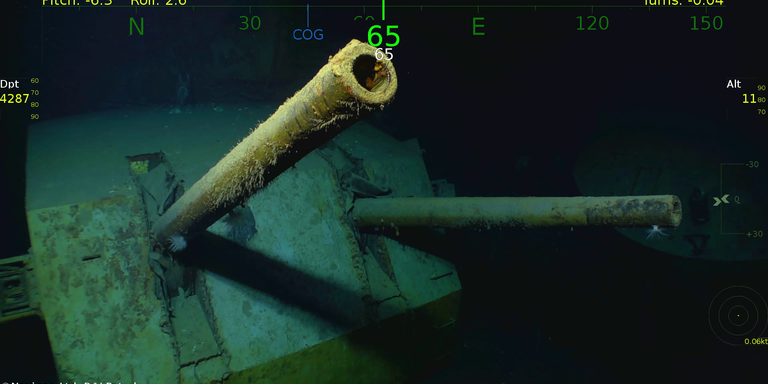 At the Battle of Guadalcanal during World War II, hundreds of sailors — including five from the same family — lost their lives while serving on the same ship for the United States Navy.

The ship, the cruiser Juneau, was blasted apart by a Japanese torpedo on Nov. 13, 1942. For decades it was lost, resting in pieces somewhere in the South Pacific.

It was found on Saturday when a team aboard the Petrel, a research vessel funded by the Microsoft co-founder and philanthropist Paul G. Allen, identified the wreckage about 2.6 miles underwater off the coast of the Solomon Islands.

Among the hundreds aboard the Juneau when it sank were five brothers from Waterloo, Iowa. Because they were all serving together, the sons of Thomas and Alleta Sullivan were well known even before they deployed.

News outlets interviewed them. They had their picture taken on the Juneau when it was commissioned on Feb. 14, 1942. They met the champion boxer Jack Dempsey at his restaurant in New York City.

Then they went to war.

But the Sullivan brothers did not see the outcome of those battles, and they never returned to Waterloo.

For Kelly Sullivan, the granddaughter of Albert, the youngest of the Sullivan brothers, the discovery of the Juneau was bittersweet. She was excited by the news, she said, and grateful to Mr. Allen and the researchers on his team.

But at the same time, she added, “it kind of opens up a scab. You feel that loss. I don’t have the big Irish Catholic family that I would have had if even one of the boys had survived.”

The Juneau was spotted in an area so littered with warships and debris that it is sometimes referred to as Iron Bottom Sound. “It suffered massive damage on the surface and was broken into pieces probably before it sank completely, so the wreckage was scattered over a mile,” said David Reams, the senior director for Mr. Allen’s maritime operations.

To find the ship, researchers pored over navigation records and battle reports to pinpoint where it might be. Then they sent an autonomous underwater device to scan the area using sonar, followed by a remotely operated vehicle with video cameras attached.

Watching that live footage, researchers in the South Pacific aboard the Petrel, a 250-foot exploration vessel, were able to discern the stern of a sunken ship, blooming with translucent anemones.

They remotely maneuvered the underwater vehicle until the letters emblazoned on the stern began to come clear. “That’s going to be the J, there’s the U, N, E, here’s the A — that’s it. That is the Juneau,” said Robert Kraft, the director of underwater operations for Mr. Allen, from his perch on the Petrel last week.

The cruiser joins a list of other sunken ships that have been found by Mr. Allen’s team recently, including the aircraft carrier Lexington this month, the destroyer Ward late last year and the cruiser Indianapolis in August.

The Sullivan brothers were on the Juneau together because the oldest, George, had sent a letter to the Navy shortly after the Dec. 7, 1941, attack on Pearl Harbor asking that they be allowed to serve on the same ship. “I talked them into going into the U.S. Navy for the U.S.A.,” the letter said. “As a bunch, there is no-body that can beat us. There is nothing that can back us up.”

After the Juneau was blown apart almost a year later, Alleta Sullivan sent her own letter to the Bureau of Naval Personnel asking about a “rumor” she had heard. “A mother from here came and told me she got a letter from her son and he heard my five sons were killed,” she wrote. “It is all over town now, and I am so worried.”

The rumor was true. George, Francis, Joseph, Madison and Albert were gone.

In response, President Franklin D. Roosevelt wrote in a personal letter to Ms. Sullivan in January 1943: “I realize full well there is little I can say to assuage your grief. As the Commander-in-Chief of the Army and Navy, I want you to know that the entire nation shares in your sorrow.”

Now that the Juneau has been found, it will stay where it is. Its exact location was revealed to the Navy but not to the public. “These are war graves, and we want to make sure that they are not harmed,” Mr. Reams said.

A movie was made about the Sullivan brothers in 1944, and the Navy named two destroyers after them. Kelly Sullivan christened one. She said the five brothers “are a symbol of all the people who have sacrificed during wartime,” adding that hers was just one of hundreds of families left grieving when the Juneau was torpedoed.

“I think maybe the sadness is really about feeling the sacrifices,” she said. “When you see the wreckage, you can feel the sacrifice that so many families made on that day.”

A version of this article appears in print on March 23, 2018, on Page A12 of the New York edition with the headline: Wreck of Warship Found 76 Years After Fiery End. Order Reprints| Today's Paper|Subscribe