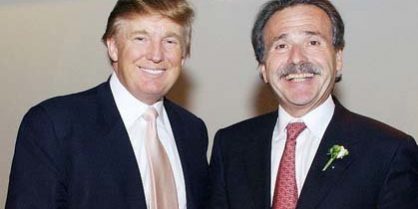 In July, David J. Pecker, the chairman of the company that owns The National Enquirer, visited his old friend President Trump at the White House.

The tabloid publisher took along a special guest, Kacy Grine, a French businessman who advises one of Saudi Arabia’s richest men and sometimes acts as an intermediary between Saudi Crown Prince Mohammed bin Salman and Western businesses.

The two men and other Pecker associates chatted with the president in the Oval Office and briefly met with Mr. Trump’s son-in-law and Middle East envoy, Jared Kushner. Before moving on to dinner with the group, the president had a photographer snap pictures of the guests standing with him behind his desk.

Mr. Pecker has long used his media empire to protect Mr. Trump’s image. During the 2016 presidential campaign, Mr. Pecker’s company, American Media Inc., suppressed the story of a former Playboy model who claimed to have had an affair with Mr. Trump.

The night of the dinner, Mr. Pecker got something from Mr. Trump: an unofficial seal of approval from the White House.

It was an opportune moment for Mr. Pecker to showcase his White House connections. He was considering expanding his media and events businesses into Saudi Arabia and also was hunting for moneyed partners in acquisitions.

The intersection of the tabloid publisher with the Saudis, enhanced by the White House visit, is a previously untold chapter in the long, symbiotic relationship between the president and Mr. Pecker, which was forged in the 1990s. At the time, Mr. Trump was celebrating a real estate comeback after his casino bankruptcies and was both the subject and the source of much gossip in New York.

Mr. Pecker, who had known Mr. Grine only for a few months, invited him to the dinner to thank him for advice he had provided about investing in the Middle East, according to someone who knew of the invitation.

Word soon traveled back to Saudi Arabia about the dinner: It signaled Mr. Pecker’s powerful status in Washington.

Two months later, he was in Saudi Arabia, meeting with Mr. Grine and the crown prince about business opportunities there, according to A.M.I.

And by January, Mr. Pecker was confident enough about his growing rapport with Saudi investors that he sought their help bankrolling a possible acquisition of Time magazine, which he had long coveted, according to two people with direct knowledge of the talks. A.M.I. disputed that.

The White House did not respond to a request for comment.

The people briefed on the interactions between A.M.I. and Saudi Arabia requested anonymity because they were not authorized to speak publicly.

The outcome of Mr. Pecker’s efforts to do business with the Saudis remains unclear. But he is still working to cultivate ties. This week, he and Mr. Grine both attended events in New York featuring Prince Mohammed, who is on a tour across the United States.

Ahead of that visit, A.M.I. published a 97-page glossy magazine that is essentially a promotional brochure for Saudi Arabia and the crown prince. It makes no mention of anything troubling, like the Saudi-led military campaign in Yemen, human rights concerns or the crown prince’s arrest last fall of many extended royals, including Prince Alwaleed bin Talal, an influential client of Mr. Grine’s.

The magazine — which refers to Saudi Arabia throughout as “the Magic Kingdom” — includes an interview with Mr. Grine, accompanied by a photo of him posing with Mr. Trump in the Oval Office, taken during his visit with Mr. Pecker. It talks up the relationship between Mr. Trump and the Saudis, noting that Mr. Trump “endorsed the crown prince’s high profile anticorruption” crackdown.

A.M.I. has said it produced the magazine to “capitalize” on interest in the crown prince, who is next in line to the throne, and has been careful to say it received no input or guidance from Saudi officials. That carries important legal implications: Foreign direction or control of such a purely promotional publication may require disclosure to the Justice Department. The Saudi government did not respond to a request for comment.

The magazine — 200,000 copies distributed in Walmart and other outlets, with a cover price of $13.99 and no advertising — provided a unique welcome mat for the prince, whose visit comes as the Trump administration is trying to establish tighter ties with the kingdom. Both countries are touting cross-border investment opportunities, including a pledge by the Saudi government to put $20 billion into a fund that will invest in American infrastructure projects. The kingdom is also nearing a deal to buy American-made missiles and other military equipment.

Mr. Grine, a 30-year-old French citizen, has helped broker deals between Saudi investors and companies in France, Senegal and the United States. He and Mr. Pecker were introduced last spring by Ari Emanuel, chief executive of Endeavor, the huge talent, entertainment and sports company based in Beverly Hills, Calif.

Mr. Grine and Mr. Pecker soon had a series of discussions about the investment landscape in Saudi Arabia, according to a person briefed on the talks. Mr. Pecker extended the White House dinner invitation shortly afterward.

A.M.I. would not say who else was among the “select group of friends” Mr. Pecker took to the White House at the president’s invitation. During the evening, the Middle East and the recent French elections came up. In a statement, A.M.I. said, “The entire conversation was social, with the exception of a couple very brief mentions of current events.”

Mr. Pecker is best known for The Enquirer, but his media empire is wide-ranging. A.M.I.’s titles include Men’s Journal, Hers, Flex and Muscle & Fitness.

The publisher has used the company at times to protect close friends, including Mr. Trump. Karen McDougal, a former Playboy model, recently filed a lawsuit alleging that Mr. Trump’s lawyer was secretly involved when A.M.I. tried to bury her story about an affair with Mr. Trump. A.M.I. bought the rights to her story during the presidential campaign for $150,000 but never published it. In the world of gossip media, such a maneuver is known as a “catch and kill” operation.

During the campaign, The Enquirer also published scathing articles about Mr. Trump’s rivals, as well as perceived antagonists like the television host Megyn Kelly. In promoting Mr. Trump, The Enquirer endorsed a candidate for the first time in its history.

Since he entered the White House, A.M.I. titles have run articles alleging a “deep state” plot to undermine Mr. Trump. As scandals engulfed the White House, a recent Enquirer cover blared: “Donald & Melania Fight Back! Exposing the Lies, Leaks and Intimidation. How They’ll Crush Their Enemies!”

The support appears mutual. Mr. Trump at times has praised Mr. Pecker’s stewardship of A.M.I. He once endorsed Mr. Pecker to run Time magazine, whose cover, Mr. Trump has incorrectly asserted, has featured him more than anyone else.

“David Pecker would be a brilliant choice as CEO of TIME Magazine — nobody could bring it back like David!” Mr. Trump wrote in a Tweet in 2013.

A.M.I. has struggled financially. It went through a series of restructurings in the last decade, including a bankruptcy in 2010 in which the company reported up to $1 billion in debts, before being acquired four years ago by two private equity funds.

The company said in a statement that it was “in an incredibly stable financial position.”

Mr. Pecker has continued to hunt for new acquisitions. Last year, he bought Us Weekly from Wenner Media. But money remained scarce, according to A.M.I.’s financial advisers. When Mr. Pecker’s friend Harvey Weinstein suggested last fall that they team up to purchase Rolling Stone, Mr. Pecker expressed little interest. “I can not contribute any cash,” he wrote in an email obtained by The New York Times.

In that same Sept. 28 exchange, Mr. Pecker wrote Mr. Weinstein: “I am in Saudi Arabia on business. Can’t call from here.”

In a statement to The Times, A.M.I.’s chief content officer, Dylan Howard, said, “Any media executive worth his or her salt must look at any acquisition opportunity in today’s media climate.”

During the visit to Saudi Arabia, Mr. Grine arranged for himself and Mr. Pecker to meet with Prince Mohammed, who is the chairman of the kingdom’s deep-pocketed Public Investment Fund. At the meeting, Mr. Pecker described his vision for expanding his events business, which includes the Mr. Olympia bodybuilding competition, into Saudi Arabia.