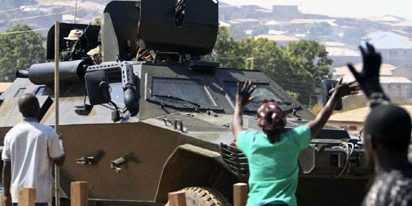 Hundreds of women and children weekend forcefully stopped military trucks from conveying their husbands and fathers to the Boko Haram-seized Gwoza by locking the exit gates of a barracks in Borno State, demanding quality fighting equipment for the soldiers.
Scores of soldiers have been killed by Boko Haram in Borno State in the last few months, and many blame the inferior weapons Nigerian troops are equipped with to fight brutal insurgents.

According to witnesses, after locking the gates, the women and children placed themselves as wedges before the trucks that were to drive out of Giwa Barracks of the 21 armoured brigade Maiduguri.

One woman was quoted as saying, “we don’t want to be made another set of widows, give our husbands modern and better arms, weapons and vehicles or they go nowhere!”

The reaction came after nearly 60 soldiers killed in Gwoza and Damboa- both in Borno State- were given a mass burial at the Maimalari Barracks Maiduguri.

The women and children also reportedly blockaded the roads leading to the barracks with stones and sticks, while some sat in front of the barracks’ gate.

Some soldiers at the barracks said they were in support of the action. One soldier who chose to remain anonymous told newsmen that “we are ever ready to tackle Boko Haram terrorists but our superior officers are not helping us by not giving us the right arms to execute the war. How can I go and face Boko Haram with AK47 that is charged with only three cartridges when the enemy is brandishing modern GPMG, AA, RPG and so on. Most of our soldiers die every day like fowls because of faulty deployment and yet when you complain they only tell you to obey the last order.”

Another soldier said, “we are being pushed to death because we usually run out of ammunition or our weapons would fail us during an operation, while the Boko Haram who came fully kitted with better arms and extra supplies would continue to pick on us like insects.”