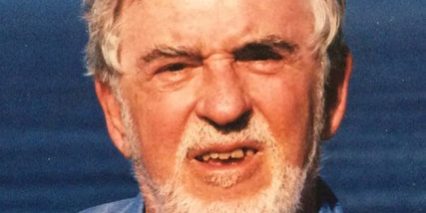 William Prochnau, a journalist and author who wrote a critically acclaimed book, “Once Upon a Distant War,” about a handful of skeptical reporters whose early warnings that the United States wasn’t winning in Vietnam went unheeded, died on March 28 in his home in Washington. He was 80.

The cause was coronary artery disease, said his wife and frequent collaborator, Laura Parker, a staff writer for National Geographic magazine.

Mr. Prochnau was a reporter for The Washington Post and a contributing editor of Vanity Fair, where his article “Adventures in the Ransom Trade” was the basis for the movie “Proof of Life” (2000), a kidnapping thriller starring Meg Ryan and Russell Crowe. (Ms. Parker said the film rights paid for the “Meg Ryan Memorial Kitchen” in the couple’s Washington home.)

Mr. Prochnau often said he was proudest of his own reportage from Vietnam for The Seattle Times in the mid-1960s — work that apparently earned him a berth on President Richard M. Nixon’s expanded enemies list.

The contrasts between what Mr. Prochnau witnessed and the cocksure official accounts of American gains against the Communists inspired “Once Upon a Distant War: Young War Correspondents and the Early Vietnam Battles,” published by Times Books/Random House in 1995.

“This small group of young men,” he wrote, “would bring down upon themselves the wrath of every power structure they confronted — the White House, the Pentagon, the South Vietnamese government, the old guard of the press itself, even their own bosses.”

In an admiring review in The New York Times, Christopher Lehmann-Haupt wrote, “When all was said and done, in Mr. Prochnau’s view, blaming the journalists was simply a case of shooting the messenger.”

The correspondents were patriotic “cold warriors all,” Mr. Prochnau concluded, but, Mr. Lehmann-Haupt wrote, “the Viet Cong was winning the war, as far as the journalists could see, which seems to have been a good deal farther than anyone in charge.”

Kai Bird, a Pulitzer Prize-winning biographer and director of the Leon Levy Center for Biography at the City University of New York Graduate Center, described “Once Upon a Distant War” in an email as the “classic account of the journalistic experience in Vietnam.”

Mr. Prochnau himself saw this experience as historically pivotal.

William Walter Prochnau was born on Aug. 9, 1937, in Everett, Wash. His father, Emil, was a circulation agent for The Seattle Times. His mother, the former Florence Foley, became a nurse.

Mr. Prochnau attended Everett Junior College (now Everett Community College) in Washington and Seattle University. At 19, he spurned an offer to play Triple-A baseball to become a sportswriter for The Everett Herald. He went on to cover sports in Alaska.

Lured to The Seattle Times, he covered Washington, the Moon landing in 1969 and the restoration of diplomatic relations with China, and profiled the assassin of John Lennon.

After leaving The Times, in 1974, he helped Sen. Warren G. Magnuson, a Washington Democrat, win a fifth term. A year later he founded the short-lived Daily Journal-American in Bellevue, Wash. He became political editor of The Post-Intelligencer in Seattle and covered the eruption of Mount St. Helens in 1980.

Mr. Prochnau reported for The Washington Post full time in the 1980s, then returned to Seattle, where he wrote freelance articles and books and in 1996 became a contributing editor to Vanity Fair.

He was nothing if not meticulous — and persistent: It took him 11 years to write his Vietnam book. Ms. Parker had vowed not to marry him until he finished it, she said, but the project was proceeding so slowly, she relented and married him in 1988, with the book not even half completed.

But that was nothing compared to the 16,000-word article that he and his wife wrote in 2002 about Oskar Speck, who kayaked from Germany to Australia in the 1930s. Pruned nearly by half, the “The Incredible True Story of History’s Longest Kayak Journey” was finally published in Vanity Fair in February, after being held for 16 years.

“The story had no news value to speak of, but it was a terrific tale and told perfectly,” Graydon Carter, the magazine’s outgoing editor wrote. “Bill was 64 when he wrote the story. He was 80 when we finally ran it. That’s what we call playing a long game.”

“Bill had the temperament and patience of an old-school reporter,” Mr. Carter said in an email in reference to the article. “So much so, that he never once prodded me about it.”