Will red-hot Rafa win in Rome? 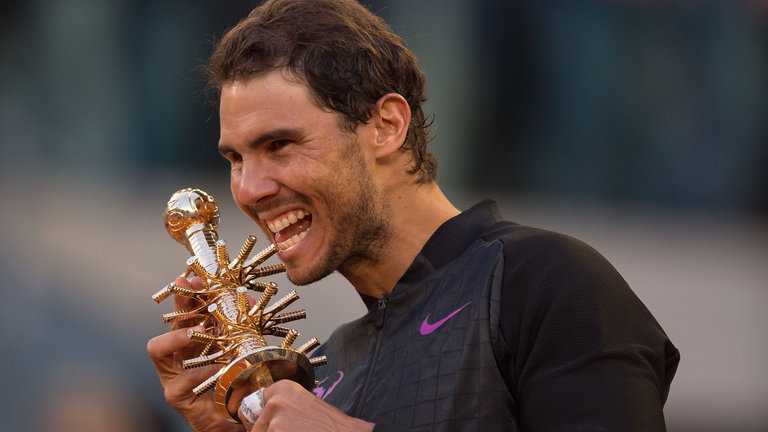 Annabel Croft and Greg Rusedski both believe Rafael Nadal is the man to beat in Rome this week after the Spaniard celebrated his 72nd career title with victory at the Madrid Masters on Sunday.

The Spaniard, who climbed to fourth in the world rankings with victory in Madrid over Dominic Thiem, is finding his best form just at the right time ahead of the French Open at Roland Garros.

Nadal, 30, has already won clay court titles this season at Monte Carlo, Barcelona and Madrid and will be targeting his eighth title at the Foro Italico this week after producing his best tennis in recent times.

The 14-time major champion hadn’t won an ATP tournament since last year’s success in Barcelona before retaining his Monte Carlo title in April but is now a firm favourite for the Rome title and also the French Open.

“I think he’s also just found so much more enjoyment again because he really went through that period of time when he was not enjoying himself on the court and he just said the new feelings he was experiencing were new territory for him,” Croft told Sky Sports.

“He had never felt like that where he was not trusting his game. He was really nervy and tentative. Not a good place to be so this second bit of his career that is producing all these results, he is enjoying it even more than the first.”

Rusedski has been pleasantly surprised and impressed by Nadal’s return to form and his ability to stay in peak physical condition following his injury travails over recent years.

“There is no better feeling as a tennis player when you start a week and you come out on top. It doesn’t get boring at any stage winning,” Rusedski said.

“It is quite incredible because most pundits and experts thought he wouldn’t be able to manage this later stage of his career playing his best tennis because physically because we all thought that he was going to break down.

“But you have to give a lot of credit to his doctors, his physical trainer and his whole team around him to get him back in shape like this. They have done a fantastic job. It is just incredible.”

Croft believes that Nadal has regained his formula of success in recent weeks during the clay-court season which coupled with his physical stature on court makes him a stern challenge for his competitors.

“He has got into this momentum now and it’s a formula. He has always had a terrific formula on the clay courts of course apart from the dip we have been talking about,” added Croft. “He is applying that formula and the more that he wins it just gets tougher and tougher because his level is now so extremely high and he just can keep on building upon that and everyone else is trying to play catch up now.”

“Even today Thiem was sensational in the first set and actually pushed him pretty close in the second set as well. But all the time you are going up against someone who is such a physical specimen out there on the court it is very difficult to break him down physically and then mentally it is very tough. You are kind of looking up a mountain.”

Rusedski called for caution however insisting that the nine-time French Open winner will feel the effects of his exertions during the clay court swing despite the obvious psychological benefits of his recent victories.

“It is tiring what he is doing at the moment,” said Rusedski. “He is thirty years of age but to win Monte Carlo, Barcelona and Madrid, it is not a foregone conclusion. He will be the favourite but it is still very tough mentally.”

For those on the move, we will have all the action from Rome and Roland Garros covered via our website skysports.com/tennis, our app for mobile devices and iPad, or follow our Twitter account @skysportstennis for news, reports, live blogs and expert analysis, with updates on Sky Sports News HQ.