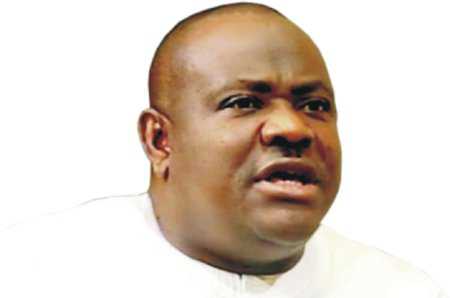 Hopes of the alleviation of the suffering of people in parts of Rivers State were on Wednesday rekindled when the state governor, Nyesom Wike, commenced the rehabilitation of a section of the East-West Road valued at N3 billion.

The maintenance of the dilapidated portion on both lanes of the East-west Road from Eleme Junction to Onne Exit point measuring a total of six kilometres is being carried out by the Rivers State Government and six companies operating in the area.

At the signing of a memorandum of understanding  (MoU) among the companies and Rivers State Government,  Governor Nyesom Wike,  warned companies operating in the area that he would not hesitate to stop their operations if they failed to honour the agreement reached on the rehabilitation of the road.

“If you don’t pay your contribution, I will not allow you to operate. We must do something to show that we have agreed on the rehabilitation of the road,” he said.

He explained that according to the MoU, the stakeholders would pay the first installment of N1.5 billion directly to RCC and pay the balance after the company had attained 80 per cent completion of the road.

He said the intention of the collaboration was to make the area conducive for business and the people.

While  initiating off the project, Wike said it was unfortunate that the Eleme section of the East-west Road was allowed to deteriorate to the level it took more than three hours for people to move from Port Harcourt to Eleme.

He however commended the stakeholders for their willingness to partner the state government to rehabilitate the road.

“Because of bad road, virtually all companies in this area are threatening to pull out of the Oil and Gas Free Zone, Onne.  But more companies will come in by two month when the road will be completed,” he assured the people.

He urged the Chairman of Eleme Local Government Caretaker Committee, Philip Okparaji, support RCC to ensure that were not harassed or intimidated by youth of the area.

In his address,  representative of the Managing Director of Intels, Mr. David Alagoa, said the government’s intervention had saved the jobs of more than 50000 workers and also impacted positively on the standard of living of the people of the area.