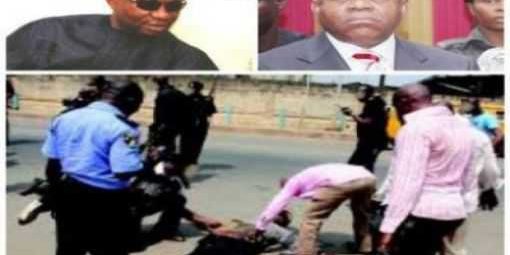 The scale of the tragedy that happened at Saturday’s reception for Governor Theodore Orji of Abia State,

South-East Nigeria, is becoming clearer following the revelation that the wife of the murdered Mr. John Ndukuba is carrying a seven month pregnancy. The poor woman just completed her National Youth Service Corps (NYSC) programme last Thursday, February 13. Now her joy has been brutally cut short, her future and that of her unborn child needlessly put into jeopardy.

When her husband, the number one aide of Chief Chinedu Orji, first son of Governor Orji, left their home in Umuahia, the Abia State capital, last Saturday for the reception organised for Governor Orji by his Ikwuano/Umuahia kinsmen, little did he know that it would be his last day on earth.

Ndubuka was shot from close range at about 5.15 p.m. as he was about to leave the former Umuahia Main Market (venue of the reception), the bullet piercing his chest through his back. He was pronounced dead by doctors at the Federal Medical Centre (FMC), Umuahia, where he was rushed to after the shooting.

Reports have it that Mr. Ndubuka met his untimely and tragic death following a misunderstanding with Chinedu, as a result of which Chinedu in a fit of anger reportedly ordered his orderly to shoot the man.

Investigations by News Express confirmed that Ndukuba was shot shortly after he opened the door for Chinedu and closed it after Chinedu entered the car. It could not be confirmed if they exchanged words.

The Abia State Government has confirmed Ndukuba’s death by shooting but exonerated Chinedu, who is known for his temperamental nature and had in the past attracted negative publicity for his brutality. The state police command has launched investigation into the incident.

•Photo shows late Ndukuba in a pool of his blood, with Governor Orji (right) and son Chinedu inset.