Why We Sold Our Son For N.5m – Parents As Pastor Impregnates Church Worshipper 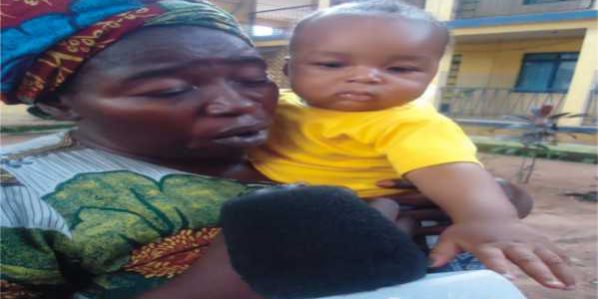 As men of the Nigeria Police, Imo State Command continue to probe the alleged sale of a six-month old boy to a teacher based in Onitsha, Anambra state, the culprits and parents of the victim, Prince Sunday Okorie and wife Sarah Okorie have given reasons for selling their baby.

Speaking to newsmen while they were being paraded at the Command Headquarters, Owerri, the father of the sold boy, Prince Sunday Okorie said that as the only surviving son of the dead parents, poverty forced him to sell the new born baby.

“We were ten in our father’s house. I happened to be the only surviving child of my parents. We are poor and had no money to survive. It is for this that we decided to sell the baby for the sake of money”, he said.

Corroborating the statement of the husband, Mrs Okorie said that hardship prompted them to offer one of their children who happens to be the only male for sale. “We had no money and needed to survive. That is why when the opportunity to make money by selling our son came, we grabbed it”.

The Police in Owerri had on Tuesday told Journalists how the Okories residing at Amaorka, in Anambra State, conspired to sell their four-month old baby for money. They allegedly met a suspected child trafficker, one Dr Mrs Sandra Odimega of Favour Hospital and Maternity, Awo Omamma, who took them into custody until 22/07/2013, when the doctor met a willing buyer, Ebere Ngozi Gloria Akalite (a teacher) of No 1 Isu Njaba Street, Awada Onitsha, who bought the baby at the cost of N500,000.

On reasons why she bought the baby, Akalite who also confessed to the act said that lack of children forced her to buy the baby.

“I had only one child, I wanted to complement the only one I have with the new baby”, she noted.

Meanwhile, a man of God from Ezinihitte Mbaise but resident at Obowo may have gone beyond his boundaries by having canal knowledge of a middle aged-woman that attends his church which resulted to pregnancy. The randy pastor, one Pastor Emmanuel Onu of Umuawada Onicha after putting the worshipper in family way at her place of domain in Avutu Obowo, took her to Angels of Mercy Hospital at No 19 Ajiwe Street, Aba where a conspiracy was said to have taking place leading to the selling of the new-born baby immediately after delivery.

The embattled pastor is engrossed in controversy over the disappearance of the baby delivered by the mistress.
Men of the Imo State Police Command have waded into the full investigation to unravel the circumstances surrounding the whole incident.