Why Sergio can win a major 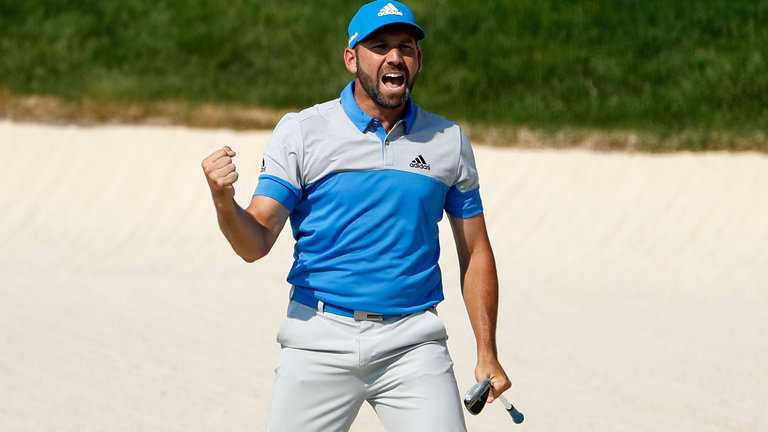 After Sergio Garcia cruised to an impressive victory in Dubai, Keith Jackson looks at five reasons why he can win that elusive major.

Garcia has long been renowned as being one of the best in the world from tee to green. His swing may not be textbook, with plenty of moving parts and a pronounced drop of the hands as he starts his downswing, but he has made it work for him and that’s all that matters.

His win in Dubai was built around his long game, leading the field in greens in regulation while only runner-up Henrik Stenson hit more fairways over the four rounds. And it’s not as if Garcia sacrificed a few yards to improve his accuracy – he was third in driving distance.

Garcia was sixth in the GIR stats on the PGA Tour last season, and fourth in the same category on the European Tour. When you hit over 75 per cent of greens in the required number of shots, you will contend.

He can build on a rare, early win

Garcia has now won 21 tournaments on the PGA Tour and European Tour combined, but only twice has he gone into the first major of the year with a victory already in the bank.

He won the season-opening Mercedes Championship in the first week of 2002, and Garcia would go on to finish in the top 10 in each of the four majors that year while also delighting his home fans with victory at the Spanish Open.

Garcia was not as consistent after winning in Qatar in January 2014, although he was the “best of the rest” as Rory McIlroy cruised to a handsome Open victory at Hoylake.

Getting an early title, especially in a high-profile event with a strong field including two reigning major champions, will do wonders for his confidence as he begins his preparations for the Masters in early April.

Happy off the course = more relaxed on the course

Garcia has endured his fair share of setbacks in his personal life, but while many professionals view tournament golf as a welcome distraction from events off the course, Sergio would often take his troubles to the first tee.

There were times when he looked like he had the weight of the world on his shoulders and, by his own admission, he gave the impression he would rather be anywhere else, no matter how he was playing.

His split with Morgan Leigh Norman, daughter of Greg, prompted a dramatic slide down the world rankings in 2010 as he plummeted to 78th by the end of the year, and the pain was evident at the Ryder Cup while he watched from the sidelines as an assistant captain.

That’s all behind him now. His home life is as settled as it’s ever been, and he can look forward to getting married this year having announced his engagement to former Golf Channel reporter Angela Akins last month.

Garcia has rarely looked so content on the course and that is a direct result of his balanced, comfortable life away from the action. And that can only lead to improved self-belief, a more relaxed attitude, and that combination will surely translate into more wins.

Time still on his side

It is almost 18 years since Garcia leapt to prominence with “that” amazing shot from behind a tree at Medinah (and the sprint and jump that followed) as he pushed Tiger Woods all the way at the 1999 PGA Championship.

That memorable event may seem a lifetime ago, but Garcia only turned 37 last month and there’s a long list of players who have won major titles while closer to 40 than 30.

And many of them were first-time winners, including the two most recent majors. Henrik Stenson turned 40 last April and earned a record-breaking win at The Open three months later. And Jimmy Walker – almost exactly a year older than Garcia – collected his first major at the PGA Championship.

Zach Johnson was the defending champion at Royal Troon having etched his name onto the Claret Jug at the age of 39, Phil Mickelson won it at 43, 2012 champion Ernie Els was 42, the same age Darren Clarke was when he won his first the year before.

Five of the last six Open champions were older than Garcia is now, and that will be a source of encouragement for the Spaniard. And being older and wiser means ….

There’s less pressure on him these days

There are doubtless a significant number of golf fans who feel Garcia has missed his window to make his major breakthrough, although he retains a vast army of supporters worldwide who will happily tell us otherwise.

Garcia has amassed a dozen top-five finishes in the major championships. His putt to win The Open at Carnoustie in 2007 lipped out and he was pipped in a play-off by Padraig Harrington, who denied Garcia again with a superb final round at the PGA Championship the following year.

He was a couple of putts away from eclipsing Tiger Woods at Medinah in 1999, and he was the best player not called Rory McIlroy in the 2014 Open at Hoylake. But, similar to the aforementioned disappointments in his home life, each major near-miss took a toll on his confidence.

The high expectations of one of the most naturally-gifted golfers of modern times have got the better of him on occasions, and he gave an insight into his attitude towards the majors at the 2012 Masters when he finished tied for 12th having been one off the lead at halfway.

“In any major I am not good enough,” he said at the time. “I have my chances and I waste them. My conclusion is I need to play for second or third place.”

But edging towards the age of 40 brings not only more maturity but an increased ability to take the bad with the good, to stay positive, and to take the pressure off himself when in contention for that maiden major.

Garcia surely remains too good a player to end his career without a major victory, and his impressive win in Dubai could be the catalyst to break that drought in 2017. And if, and when, it does happen, you’d have to be cold-hearted to begrudge him that magic moment.