Why President Jonathan Forced Out His Chief Of Staff Oghiadomhe resigned 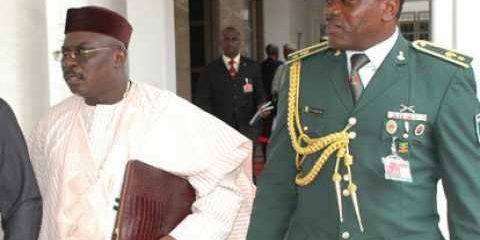 The shoddy handling of the President’s trip to Sokoto, where he received former governor of the state,

Attahiru Bafarawa into the Peoples Democratic Party, PDP, may have been responsible for the removal of the former Chief of Staff to President Jonathan, Chief Mike Oghiadomhe from office.

However, the Special Adviser to the President on Media and Publicity, Dr Reuben Abati, who confirmed Oghiadomhe’s resignation, said it was to enable him seek higher political office within the PDP.

He also debunked an online report that the former Chief of Staff was sacked because of his involvement in alleged fraud in the Nigerian National Petroleum Corporation, NNPC.

Vanguard gathered that though the President had been inundated with series of allegations against his former Chief of Staff, the Sokoto incident was the final straw that broke the camel’s back.

A source at the Presidential Villa told Vanguard that the Chief of Staff failed to inform the Governor of Sokoto State, Magatakarda Wammako of the President’s visit as protocol demands.

Instead, he was said to have informed the Deputy Governor, Muktar Shagari who, unlike the governor, refused to decamp to the opposition All Progressives Congress, APC.

The President was received at the Airport by the Deputy Governor, Mukthar Shagari even though the governor was in town at the time of the President’s visit.
Jonathan’s anger

The President was said to have been angry that, at a time everything was being done to woo some of the aggrieved governors who left the PDP back to the Party, deliberate obstacles were being created by some of his close aides.

An indication that Oghiadomhe’s resignation was contrived emerged when he resumed in the office yesterday morning and attended a meeting of a committee on the Centenary Celebrations.

Confirming Oghiadomhe’s resignation, Abati said it had nothing to do with the speculation that one online publication had tried to portray.

“The president received the letter today which was titled ‘letter of resignation’ and it said he wished to pursue other political necessities in our great party. You would recall that about two weeks ago before the president travelled to Ethiopia, he announced in council that if there was any member of the cabinet or any major political appointee who wanted to pursue some other political roles, such people may want to go and pursue other things in whatever capacity, stressing that such people are going to be engaged heavily in political activities. They should let him know; and if they felt that they are going to be really busy, and such activities may occupy their time extraordinarily, they should please step aside or come and see him for discussion.

“That you can confirm. It happened on the floor of the council. And you can see what I have pointed out as the reason for the Chief of Staff’s resignation is in line with that.

“We find the speculation particularly by some of the online platforms callous, completely unreasonable, considering that this is a man who has served and who has given time and energy to the pursuit of the good interest of our country.

“Mr president appreciates his contributions and he would like to put on record that indeed he was a man who discharged his responsibilities diligently and the country is very grateful to him and the president personally would like to wish him well in his future endeavours”.

On whether there is a replacement, Dr Abati said “Not yet”.