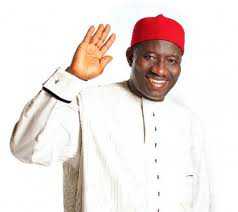 Obasanjo left for China shortly after the meeting.

Impeccable sources told National Mirror that the President moved out of his comfort zone to personally market his re-election bid in the face of growing opposition ahead of the 2015 presidential poll and to mend fences with the former president.

A highly placed personality privy to the meeting said that the parley, which came at the instance of President Jonathan, was also as a result of the deepseated divisions in the Peoples Democratic Party, PDP; opposition against Jonathan’s re-election particularly from the North and the threat by the yet-tobe- registered All Progressives Congress, APC.

The governors, according to National Mirror’s investigation, visited Obasanjo to inform him about their discomfort in the PDP and their plans ahead of the 2015 elections.

Though President Jonathan said that he was in Abeokuta to condole with his spokesman, Dr. Reuben Abati, over the death of his mother, Maria Taiwo, who was buried on Friday, the President was actually in the town to appease Obasanjo for his political survival.

“It is true that we saw (former) President Obasanjo in his house because we came to Abeokuta to commiserate with Abati who buried his mother yesterday (Friday).

“Knowing that Abati’s house is at the backyard of Obasanjo’s, it will not be good if we come and we did not visit him. Even the man (Obasanjo) himself will not be happy if we don’t visit him. I am like a son to Obasanjo,” Jonathan had told reporters at Abati’s residence.

A source said the President had earlier sent a highpowered delegation, led by his Chief of Staff, Chief Mike Oghiadomhe, to the burial and that there was no need for his personal presence.

“The visit was purely political, not social as claimed by the President,” a source said.

It was learnt that during the closed-door meeting, President Jonathan told Obasanjo about his plan to seek re-election in 2015 and the need for his blessing.

The President was also said to have used the visit to make amends about his frosty relationship with the former ruler.

“The President sought an understanding with Obasanjo, particularly about the need to support his government and the party.

“In the course of the meeting, President Jonathan requested of the former President that he should be more involved in the affairs of the PDP at the national level.

“Jonathan lamented about the crisis rocking the party, which he was not happy about. He told the former president that his involvement in the PDP affairs will reduce the growing tension in the party,” the source said.

Obasanjo was said to have been frank with Jonathan about his position on the issues raised.

The source said that Obasanjo told President Jonathan that he had not been fair to him, especially by alienating his political associates from his government and the party.

“The former president told his visitor that deliberately, his government has done so much to humiliate him and his associates. He also complained about the sincerity of the President’s advisers in the discharge of their duties and in creating a gulf between him and the President,” the source added.

Obasanjo was said to have told President Jonathan that he would consider his requests at the end of this month after the conclusion of the Zimbabwean election holding next week.

Obasanjo is leading a team of 60 African Union monitors to Zimbabwe for the July 31 election.

The latest meeting was a follow up to the one held between Obasanjo and the Chairman, PDP Governors’ Forum, Akwa Ibom State Governor Godswill Akpabio, last week.

Akpabio, a close ally of Jonathan, met with the former president in Abuja to shore up support for President Jonathan.

It was learnt that Governors Kwankwaso, Nyako, Wammako and Lamido told Obasanjo about their frustration in the PDP and their game plan.

National Mirror reliably learnt that the governors, who are political associates of Obasanjo, were planning to float a new party early next year.

“The governors told Obasanjo that they are no longer comfortable in the PDP. They said as a mark of honour they have come to inform Obasanjo about their plan to move out of the PDP. They didn’t want the former ruler to hear about the plan outside without due consultation,” a source said.

Obasanjo was said to have told the governors to allow peace to reign, promising to mediate in the crisis.

“We have come to greet the most accomplished Nigerian ever and would remain so for a very long time and to consult him on very important matters,” Nyako had told reporters after the meeting.

It was gathered that the plan of the governors was to allow the crisis in the PDP to fester on towards the elections in 2015.

“We are not contesting the PDP ticket with Jonathan because we know the party will hand over the ticket to him. But the game plan is to weaken the PDP and reduce the party to nothing before the 2015 elections.

“Our governors won’t join the APC but will float a new party that will form an alliance with the people of the South-West. Don’t forget that the North has the numerical voting strength to decide who wins the Presidency,” a source privy to the arrangement told National Mirror.

Kwankwaso is the arrowhead of the group.

Speaking with National Mirror on the governors’ visit to the former president, the PDP National Vice- Chairman (North-West), Ambassador Ibrahim Kazaure, who was present at the meeting, said he only accompanied the governors to the meeting.

He, however, told our reporter that he could not speak on what transpired during the meeting.

The PDP national vicechairman also feigned ignorance of the plot by the governors to float a new party, saying: “I don’t know; I cannot go into their public life. I know nothing about what you are talking about. I’m hearing it for the first time from you that some of the governors are planning to form a new party. If I know I will dissuade them from doing that.”

The Director of Press and Public Relations, Kano State Government House, Baba Dantiye, also denied the rumour that Kwankwaso and other governors were planning to float a new party.

“I can tell you categorically that that is not true,” Dantiye told National Mirror yesterday.

On the governors’ visit to former President Obasanjo, he said it was about consultation. “Obasanjo is a leader and statesman in the country. This is a man who has governed Nigeria both as military and civilian. He was also the PDP BoT chairman. So, you should expect regular consultation with him,” Dantiye told National Mirror yesterday.

An aide of Obasanjo also confirmed to National Mirror that the meetings of President Jonathan with the former President and that of the governors were on the crisis in the PDP.

“The meeting President Jonathan had with Chief Obasanjo is part of the serious effort to revive the cohesion of the PDP which is not there,” he said.

It will be recalled that the relationship between Jonathan and Obasanjo had been frosty shortly after the 2011 presidential election.

Obasanjo is said to be averse to Jonathan’s reelection. The situation degenerated when Obasanjo resigned on April 3, 2012 as the BoT chairman.

Obasanjo’s associates have been having it rough with the Jonathan government. Also, his associates in the PDP had been sacked from office.

In another development, President Jonathan is intensifying efforts at his re-election by holding strategic meetings with stakeholders on his ambition.

It was learnt that the President met with key groups at the weekend in Lagos.

A source privy to one of the meetings told National Mirror that the President considered his electoral fortune in the South-West against the backdrop of the crisis in the South-West PDP and the dominance of the Action Congress of Nigeria, ACN.

National Mirror learnt that the Presidency was already funding the Labour Party, LP, in the South-West through a serving governor and two former governors from the geo-political zone.

The understanding is that through the LP and PDP machineries, President Jonathan will be able to secure the mandatory 25 per cent of votes cast in the six South-West states.