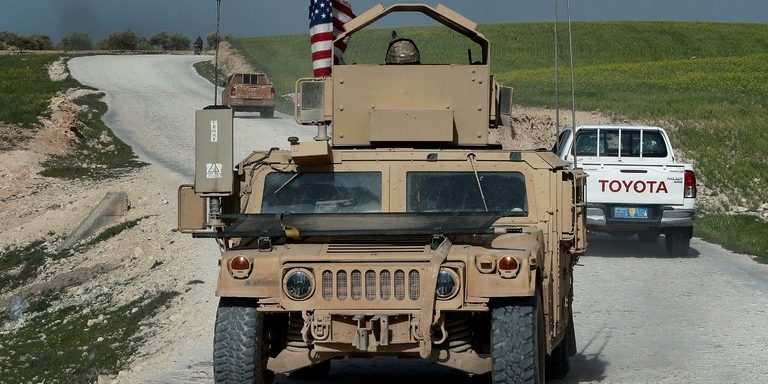 WASHINGTON — The White House said on Wednesday that the United States is committed to continuing to fight the Islamic State in Syria, signaling a retreat by President Trump from his insistence that the 2,000 American forces there quickly return home from the conflict.

“The military mission to eradicate ISIS in Syria is coming to a rapid end, with ISIS being almost completely destroyed,” Sarah Huckabee Sanders, the press secretary, said in a statement issued one day after Mr. Trump met with military commanders to discuss the future of the mission. “The United States and our partners remain committed to eliminating the small ISIS presence in Syria that our forces have not already eradicated.”

The statement indicated that the president’s top military advisers, who have argued that maintaining United States forces in Syria is crucial to defeating the Islamic State and ensuring that the militant group cannot regain a foothold in the region, have succeeded — at least for now — in persuading an impatient commander in chief not to order a quick withdrawal.

The statement was issued one day after Mr. Trump made plain his eagerness to pull American troops out of Syria, arguing that the United States had essentially already won the battle against the Islamic State and saying that “sometimes it’s time to come back home.”

“I want to get out — I want to bring our troops back home,” Mr. Trump said on Tuesday during a news conference with leaders of Baltic nations. “It’s time. We were very successful against ISIS.”

The United States has been aiding a military campaign in Syria that has reclaimed much of the territory once under the control of the militant group. But while Mr. Trump has expressed enthusiasm for battling ISIS, he is reverting to the “America First” posture he pressed as a candidate, hoping to separate the United States from foreign involvement and military adventures abroad.

The decision about troops came at a time when Mr. Trump’s national security team is in flux, and has been divided over what to do in Syria. The president ousted his secretary of state, Rex W. Tillerson, last month, and his national security adviser, Lt. Gen. H.R. McMaster, is soon to depart after Mr. Trump decided to replace him with John R. Bolton.

While Mr. Trump has pressed intensively to withdraw troops and unwind American involvement, a number of military and civilian leaders have argued that keeping the remaining 2,000 United States troops in Syria and maintaining the more than $200 million in recovery aid there are crucial to completing the job of defeating the Islamic State.

“A lot of very good military progress was made over the last couple years,” said Gen. Joseph L. Votel, the top officer at the military’s Central Command, during a conference in Washington on Tuesday.

“But again, the hard part I think is in front of us, and that is stabilizing these areas, consolidating our gains, getting people back into their homes, addressing the long-term issues of reconstruction and other things that will have to be done,” General Votel said.

The president surprised even his own advisers last week when he said publicly that the United States would soon remove troops from Syria.

Mr. Trump was in Ohio delivering remarks on trade policy when he veered off topic and said, “We’re knocking the hell out of ISIS,” and added: “We’ll be coming out of Syria, like, very soon. Let the other people take care of it now.”

The following day, Mr. Trump directed the State Department to halt financial recovery assistance for Syria while his administration reconsidered its policy.

By Tuesday, he said he was consulting with allies and would soon be ready to announce a new policy. The White House said the president spoke on Monday with King Salman of Saudi Arabia, and “discussed joint efforts to ensure the enduring defeat of ISIS and counter Iranian efforts to exploit the Syrian conflict to pursue its destabilizing regional ambitions.”

In his news conference, Mr. Trump gave a sharper account of the conversation, suggesting that the king had pressed him to maintain the American troop presence in Syria as he objected.