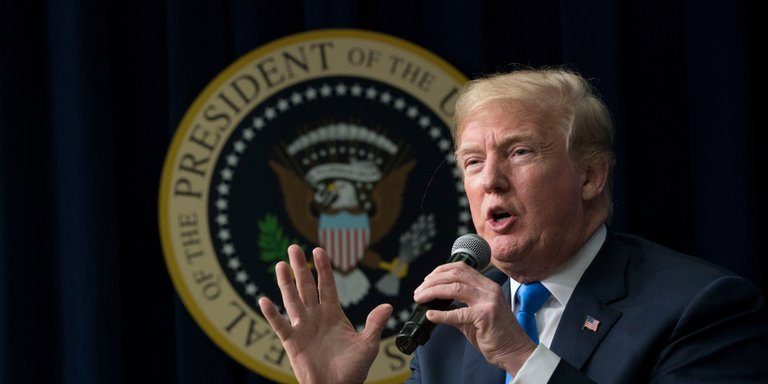 WASHINGTON — President Trump has been commander in chief for 14 months, but to an uncanny degree, he still sounds like the armchair statesman who ran for the White House in 2016.

“I want to get out,” Mr. Trump said of the United States’ military engagement in Syria, at a news conference on Tuesday with leaders of the Baltic States. “I want to bring our troops back home.”

Mr. Trump’s words were at odds with the strategy his administration is pursuing in Syria. But they were almost verbatim what he said in pre-election tweets, as well as in debates two years ago against Republican challengers and his Democratic opponent, Hillary Clinton.

Far from learning on the job or modifying his views to fit the imperatives of America’s global role — as did so many of his predecessors — Mr. Trump is falling back on the familiar mix of belligerence and isolationism that fueled his “America First” campaign.

The NATO alliance, he said, was “delinquent.” Russia is a partner with whom, he insisted, “I think I could have a very good relationship.” The United States should have “kept the oil” after the Iraq war. Rather than pursuing military adventures abroad, he said, “I want to get back. I want to rebuild our nation.”

How these new players will mesh with Mr. Trump’s throwback persona may determine whether the president is signaling a midcourse correction in foreign policy or merely retreating to phrases and positions that give him comfort.

Mr. Tillerson and General McMaster curbed some of Mr. Trump’s most radical ideas — convincing him, for example, not to rip up the Iran nuclear deal. Along with Defense Secretary Jim Mattis, they talked him into deploying more troops to Afghanistan.

Mr. Pompeo and Mr. Bolton, analysts predict, will bend more readily to Mr. Trump’s wishes. Add to that a difficult midterm election, which aides say will make the president determined to cater to his political base. And, after more than a year in office, they say Mr. Trump is more confident that his instincts are the right ones.

“He has been very consistent essentially since the 1980s,” said Eric S. Edelman, a former under secretary of defense for policy in the George W. Bush administration. “He knows very little about the world, about history, about the policy details. But he does have strong convictions and they are remarkably durable and apparently impervious to contrary evidence.”

They include, Mr. Edelman said, the belief that his predecessors were gullible, and that he will do better; that allies have exploited the United States, and must pay back their debts; that free trade is bad; and that military force should be used sparingly, but that “we should be strong and scary and that will make people afraid to screw with us.”

All those convictions were on vivid display in the East Room on Tuesday.

Mr. Trump reiterated his contention that the North American Free Trade Agreement is “a phenomenal deal for Mexico” and a “horrible deal for the United States.” Mexico, he complained, ran a trade surplus of more than $100 billion with the United States.

He claimed that no one had been tougher on Russia than him, pointing to his recently passed $700 billion defense budget. But Mr. Trump said nothing about his administration’s expulsion of 60 Russian diplomats as a punishment for the country’s role in a nerve agent attack on a former Russian spy and his daughter living in Britain.

“I could have a very good relationship with Russia,” he insisted. “And with President Putin. And if I did, that would be a great thing.”

Mr. Trump praised his three Baltic guests and promised that the United States would be a steadfast ally. But he slammed other NATO members for not paying their fair share of the alliance’s costs.

Nor did Mr. Trump spare a more favored ally, Saudi Arabia, which he said was pressing the United States to stay militarily engaged in Syria. The White House said the president spoke on Monday with King Salman of Saudi Arabia, and Mr. Tump seemed to refer to the conversation at the news conference. “I said, ‘Well, you know, you want us to stay, maybe you’re going to have to pay,’” he recalled.

Mr. Trump’s remarks, which came two weeks after he welcomed the king’s heir, Crown Prince Mohammed bin Salman, to the White House, left some senior officials shaking their heads. They also created a split-screen moment that is becoming all too common in Washington.

Even as he was talking about withdrawing the 2,000 remaining United States troops in Syria and cutting more than $200 million in recovery aid there, the administration’s point man for combating the Islamic State, Brett McGurk, was making the case across town for more aid and troops staying until the job is done.

Speaking at the United States Institute of Peace, Mr. McGurk said the $100 million the United States has already spent on recovery aid — used to clear away unexploded bombs and clean up giant piles of war rubble in Raqqa — was essential to allow many of the one million displaced residents to return home.

Mr. Trump’s order to suspend the future aid, pending a review, “is not hampering our work in the field,” Mr. McGurk insisted. He also seemed to suggest that American troops were not leaving anytime soon.

“We’re in Syria to fight ISIS,” Mr. McGurk said. “That is our mission. Our mission isn’t over. We’re going to complete our mission.”

Above all, Mr. Trump has taken pride in delivering on his campaign promises. Earlier on Tuesday at a working lunch with the Baltic leaders, he noted that he had campaigned against trade deficits and was taking aim at them, with China.

He has also promised to move the American Embassy to Jerusalem from Tel Aviv — and has done so, even at the risk of jeopardizing his goal of a peace deal between Israel and the Palestinians.

But Bill Clinton and George W. Bush both promised to move the embassy during their campaigns, too, only to reverse course later when they realized the costs of such a decision.

“The best and most intelligent presidents are adaptive,” said R. Nicholas Burns, a diplomat who served in the Clinton and Bush administrations. “They reconsider some of their views from the campaign. I worry that we are looking at someone who is not adaptive — who is not learning on the job.”