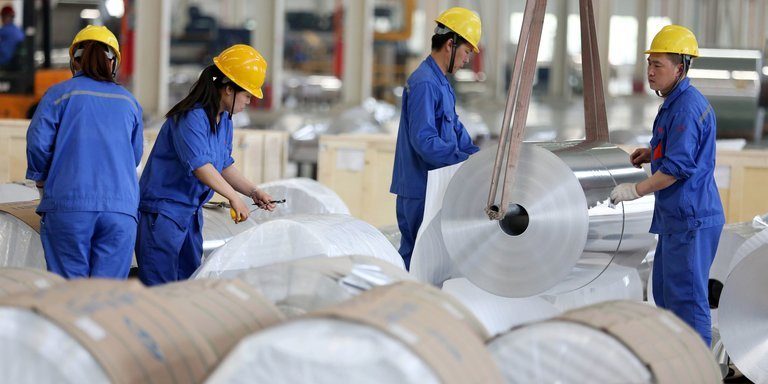 WASHINGTON — President Trump continued to defend his pugnacious approach to trade policy on Friday, just hours after he doubled down on a White House plan to punish China by threatening to levy tariffs on an additional $100 billion in Chinese imports.

Mr. Trump, who has already imposed sweeping steel and aluminum tariffs on China and other nations, boasted in a tweet that the new metals tariffs had not hurt American consumers as his critics predicted.

The price of aluminum per pound has been falling since February, a decline that started before the tariffs were imposed. Mr. Trump’s decision to exempt Canada, which supplied more than half of America’s aluminum imports in 2016, has also helped to soften the blow from tariffs, companies say.

The president also defended his surprise announcement Thursday night that the United States would consider an additional $100 billion in tariffs on China, a total which would triple an earlier trade threat. The president re-upped a tweet from Wednesday that maintained the tariff threats did not amount to a trade war with China.

In a radio interview that was taped on Thursday and aired on Friday, Mr. Trump acknowledged his approach to China could cause “a little pain” to financial markets but that it would be worth it in the long run.

“Now we could—the easiest thing for me to do would be just to close my eyes and forget it,” Mr. Trump said on WABC Radio’s “Bernie & Sid in the Morning” show.

“If I did that, I’m not doing my job. So, I’m not saying there won’t be a little pain but the market’s gone up 40 percent, 42 percent—so we might lose a little bit of it—but we’re going to have a much stronger country when we’re finished. And that’s what I’m all about. We have to do things that other people wouldn’t do.”

“The President is for free trade, but it must also be fair trade. Addressing unfair trade practices and ensuring that global trade is free, fair, and reciprocal will have a significant positive long-term impact on the U.S. economy,” the statement said.

But the approach has come under swift and stinging criticism from lawmakers of both parties, as well as industries whose businesses depend on access to China’s markets.

Senator Heidi Heitkamp, a Democrat from North Dakota, called Mr. Trump’s actions “reckless,” saying in a tweet that “60% of ND’s exports to China are agricultural products. China’s unfair trade policies need to be reined in but this isn’t the way to do it.”

In his statement on Thursday, Mr. Trump said he had instructed the Agriculture secretary to implement a plan to protect farmers and agricultural interests. It is unclear what that plan could entail but Chad Bown, a senior fellow at the Peterson Institute, said that if the president chooses to subsidize farmers, he could spark a wider conflict with countries beyond China, who would object to unfair competition from America agriculture.

White House trade advisers have described the tariff threats as a long-overdue action against a pernicious cheater in global trade, saying China has long engaged in pressure, coercion and outright theft to gain access to valuable intellectual property. Yet the escalating threat of a trade war between the world’s two largest economies has unnerved many American businesses that depend on China to source goods or as a market for their own products.

Global markets were cautiously lower on Friday, following a volatile week in which markets plunged on the president’s initial trade threats, then recovered as his advisers said the trade move was mostly a negotiating tool and might not even go into effect.

China was celebrating a national holiday Friday and did not immediately announce any concrete action to the president’s threat of an additional $100 billion in tariffs. A spokesman said the Chinese Ministry of Commerce had “taken note” of the White House’s statement, adding that “the Chinese position has been made very clear. We do not want to fight, but we are not afraid to fight a trade war.”

In the meantime, the trade measures ignited a swift response from manufacturers, retailers and politicians from states whose economies depend on agriculture. Although China exports far more to the United States than it imports, China is still the United States’ third largest export market after Canada and Mexico, a vital destination for American-made goods like Boeing airplanes, luxury automobiles and soybeans.

“Hopefully the president is just blowing off steam again, but if he’s even half-serious, this is nuts,” Senator Ben Sasse, a Republican of Nebraska, said on Thursday. “Let’s absolutely take on Chinese bad behavior, but with a plan that punishes them instead of us. This is the dumbest possible way to do this.”

The National Retail Federation criticized the new round of tariffs as a dangerous game of chicken ending with the United States on the losing end of a trading relationship that has benefited American companies and consumers.

“This is what a trade war looks like, and what we have warned against from the start. We are on a dangerous downward spiral, and American families will be on the losing end,” Matthew R. Shay, the president and chief executive of the retail group, said in a statement. “We urge the administration to change course and stop playing a game of chicken with the nation’s economy.”