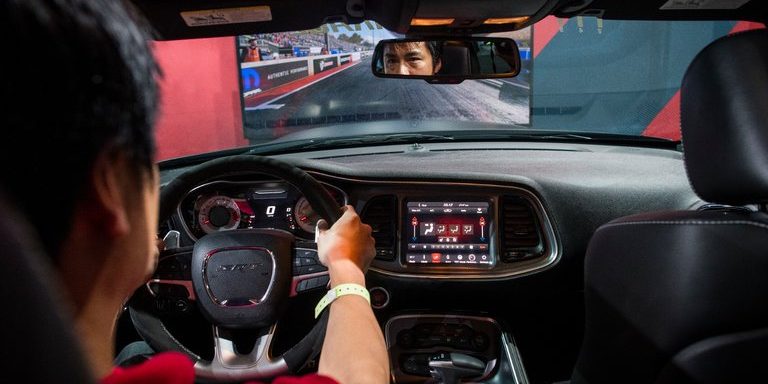 Virtual Reality Is Carmakers’ Latest Selling Tool, at Shows and in Showrooms

Advances in microprocessor and electronic-sensor technology have helped turn today’s car into an immersive multimedia experience spread across high-definition screens. But car companies do not limit the technological flash to the inside of the car — high-tech, gaming-inspired marketing pitches are following right on its bumper.

Automakers are offering augmented reality experiences, video displays that involve the viewer and lifelike virtual reality simulations to lure buyers. The most sophisticated executions are developed primarily for events like the New York International Auto Show, opening to the public on Friday.

At shows filled with outrageous concept cars and shiny models making their debuts, it takes more than a pretty car to stand out. Visitors might learn about an automaker’s plans for urban mobility while flying above a make-believe landscape, take a virtual reality sprint around a test track or scream down a drag strip at the wheel of a production-model hot rod.

The Dodge Drag Strip Simulator lies at the point where make-believe meets reality, and where automotive engineering spills over into video game science. The latest version roared to life last year in New York and will appear again at this year’s show. The simulation matches two genuine Dodge Demons — with a multitude of electronic and hydraulic devices packed under their hoods where the engines used to be — in a side-by-side contest on a video drag strip that is seen through the vehicles’ windshields.

Lifting their front wheels on takeoff, the cars leave the virtual starting line with the slam-you-in-the-seat G-forces of the acceleration wrought by the Demon’s 808 horsepower. Electronically controlled, hydraulically powered struts simulate dynamic events — including the wheelie. Engine vibration and track surface changes are transmitted to the seat of the driver’s pants and synced with the video. Realistic feedback is communicated through the steering wheel, and eardrum-assaulting sound plays through speakers inside and outside the cars.

The driver must use the throttle with precision, steer accurately and shift at the correct intervals to record a good elapsed time and top speed. The simulator’s ability to mimic the real thing is uncanny: Dodge reports a best quarter-mile simulator performance of 9.68 seconds at a top speed of 136 m.p.h.; a production Demon took 9.65 seconds and reached 140 m.p.h. when tested by the National Hot Rod Association, the organization that oversees professional drag racing.

“We used the automobile’s technology to create a marketing campaign, a campaign that creates a halo for the brand,” said Mark Malmstead, head of marketing for Dodge SRT, the brand’s high-performance arm. “The computers that control the simulation are right out of the Demon.”

While simulations put showgoers in the driver’s seat of a device that acts and feels like a real vehicle, virtual reality executions can pack a three-dimensional, 360-degree video environment — such as the interior of an automobile and the view through the windows — into a headset. The experience is often enhanced by electronic manipulation of the viewer’s seat. A number of automakers showed off such V.R. systems at the North American International Auto Show in Detroit in January, and the technology is already being used in dealerships.

Ford has developed a V.R. display called City of Tomorrow. The experience includes a ride in a flying machine that rises above a make-believe urban landscape and shows off some of the company’s transportation technology. Dynamic control of the seat simulates acceleration and turning forces. It proved popular at the Detroit show and will be part of Ford’s display in New York.

After success with a V.R. experience developed for a Connecticut dealer’s showroom, Cadillac is expanding the effort to include more dealerships.

Like Cadillac, Lexus has developed a V.R. experience for dealerships and venues other than auto shows. It takes viewers to a virtual space where they can walk around vehicles, open the door to look inside and configure a car of their own, even before it’s available for purchase.

“Lexus and Team One took the Virtual Showroom on the road to support dealer launches, create interest at events and inspire preorders,” said Todd Lewis, events marketing strategist for the brand.

But in today’s fast-moving digital world, last year’s V.R. technology is just so, well, last year. So some automakers are developing displays that mix real and virtual objects in the same space.

Honda used such a system to pit its Civic Type R against a video game version of the same car. The competition, which took place on the Road Atlanta racecourse, is documented in a YouTube video. A racecar driver handled the real car, while an experienced video gamer drove its virtual twin. While the result is interesting — the cars finish within a second of each other — reducing it to flat screen video takes away some of the magic.

At the Detroit show, Honda offered a different mixed reality experience that employed Microsoft’s HoloLens technology. Wearing a headset, show attendees were able to walk around and enter a car, with holographic visuals promoting the product all along the way.

Carmakers are also using interactive video in their pitches. Many dealerships that sell Mercedes-Benz’s high-performance AMG models are using a system called Power Wall to demonstrate the technology of those six-figure vehicles. AMG vehicles and their components are displayed on video screens as large as 220 inches, and with a touch-screen controller, users can view internal parts, move in to study one, and select videos or demonstrations that provide detailed information.

Fiat Chrysler has created a more modestly sized tool that it uses to market upfits — modifications that prep the vehicle for a certain job, such as towing — for its Ram trucks. By holding an iPad up to key spots on a Ram, consumers can visualize a variety of upfit options.

But the most impressive way that companies have deployed fresh technology remains those hard-to-replicate experiences, like the Dodge Demon drag simulator or Chevrolet’s virtual reality experience, which puts users on a digital version of the General Motors test track in Milford, Mich., and at the automaker’s desert proving ground in Yuma, Ariz.

Chevrolet calls the display Four Dimensional V.R. because it involves not only the 360-degree view in the headset but also dynamic movement, vibration and even a bit of wind in the face. Electronically controlled seats toss users this way and that as a they ride around the track and up and down hills in various Chevrolets.

The display premiered in Detroit and was part of the brand’s Chicago Auto Show display last month, said Paul Edwards, Chevrolet vice president of marketing. More than 20,000 people sampled it at those two shows. It will be featured in New York as well.

“We wanted to take consumers behind the scenes and demonstrate what we do to ensure the quality of the vehicles,” Mr. Edwards said. “The technological level of the experience has a rub-off on the brand.”