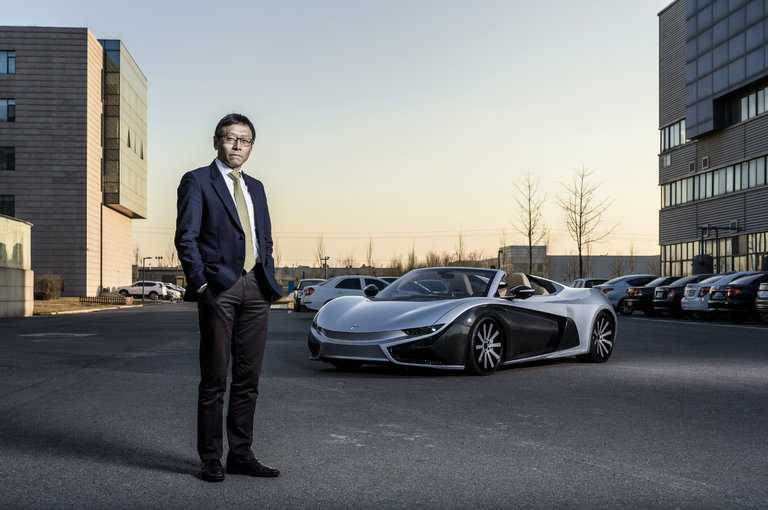 BEIJING — On a windswept lot near Beijing’s main airport, Lu Qun talks up the electric sports car he hopes will transform him into China’s Elon Musk.

“This is a real performance car,” the entrepreneur boasted of his sleek, gray-and-black Qiantu K50. “It’s fun. You can feel the quality. You’ll love driving this car.”

For Mr. Lu, 48, the roadster is his best chance to make it big. After a lifetime of obscurity creating vehicles for other companies, the bespectacled engineer is betting that the rise of electric cars will propel his company — and his country — into the automotive spotlight.

“Traditional auto manufacturers are constrained by their old models,” he said. “We can see things with fresh eyes.”

BEIJING — On a windswept lot near Beijing’s main airport, Lu Qun talks up the electric sports car he hopes will transform him into China’s Elon Musk.

“This is a real performance car,” the entrepreneur boasted of his sleek, gray-and-black Qiantu K50. “It’s fun. You can feel the quality. You’ll love driving this car.”

For Mr. Lu, 48, the roadster is his best chance to make it big. After a lifetime of obscurity creating vehicles for other companies, the bespectacled engineer is betting that the rise of electric cars will propel his company — and his country — into the automotive spotlight.

“Traditional auto manufacturers are constrained by their old models,” he said. “We can see things with fresh eyes.”

Across China, government officials, corporate executives, private investors and newcomers like Mr. Lu are in a headlong rush to develop a domestic electric car industry. The country’s goal, like Mr. Lu’s, is to capitalize on the transition to electric to turbocharge the country’s lagging automobile sector to become a major competitor to the United States, Japan and Germany.

That has been a goal of China’s industrial planners for decades, as the government has lavished resources on building homegrown automakers and discriminated against foreign players.

But so far, that effort has failed.

Local manufacturers have lacked the brands, technology and managerial heft to outmaneuver their established rivals, either at home or abroad. Chinese consumers have preferred more reliable Buicks, Volkswagens and Toyotas to the often substandard offerings from domestic manufacturers, while little-known Chinese models have struggled to gain traction overseas.

Electric vehicles could offer a second chance — one China’s policy makers do not intend to miss.

They targeted electric cars for special support in an industrial policy called “Made in China 2025,” which aims to foster upgraded, technologically advanced manufacturing. By 2020, Beijing expects its automakers to be able to churn out two million electric and hybrid vehicles annually — six times the number produced in 2015.

This time, China’s carmakers may be better positioned. Since electric vehicles are a relatively new business for all players, Chinese manufacturers and international rivals are largely starting from the same point.

“There is a smaller gap between where China is today and the rest of the world” in electric cars, said Bill Russo, managing director at Gao Feng Advisory, a Shanghai consultancy, and a former Chrysler executive. “There is room for newer start-up companies to dream big in China.”

Mr. Lu is one of those dreamers.

Fascinated by cars since he was a boy, he studied automotive engineering at Beijing’s prestigious Tsinghua University. Upon graduating in 1990, he joined the research and development team at the China-based joint venture of Jeep, then a division of Chrysler.

During his time there, which included two years in Detroit, Mr. Lu came to feel such overseas operations had limited prospects in China — the ventures’ partners would try to balance their interests, and so were slow to develop strategies and make decisions.

So in 2003, he and nine colleagues started CH-Auto Technology Corporation as a specialty research and design shop for the local car industry. Since then, the firm has designed vehicles for some of China’s biggest automakers.

Mr. Lu decided to start manufacturing his own vehicles because of the shift to electric. Since producing electric cars requires new parts and technologies, he believed a small entrant could better compete with these new vehicles than traditional automakers.

“Electric vehicles won’t just replace cars with conventional engines, but they will bring a huge change to the entire car industry,” Mr. Lu said. “We wanted to be part of this revolution.”

The result is the K50. Designed at his research center, the two-seater has a light, carbon fiber exterior and a console stuffed with touch screens. Rows of batteries propel the roadster to a top speed of about 120 miles per hour and carry it as far as 200 miles on a single charge.

No longer content to watch others produce his designs, Mr. Lu is currently constructing a $300 million factory in Suzhou, a city near Shanghai, to manufacture 50,000 cars a year. In all, he expects to invest as much as $1.4 billion into his venture over five years.

He did not specify what the car would sell for, but Mr. Lu intends to price the K50 at the top of the market when it goes on sale this year.

That sets CH-Auto on a collision course with the industry’s flagship: Tesla.

Elon Musk’s company already has an edge. While Mr. Lu is building his business from scratch, Tesla has been established in China since 2013. CH-Auto will have to persuade wealthy customers to plunk down a large sum on an unfamiliar brand — Qiantu — over Mr. Musk’s recognizable models.

Mr. Lu nevertheless remains confident. He argues the sporty K50 will appeal to a more leisure-oriented driver than Tesla’s cars. As a logo, the company has chosen the dragonfly, because its managers believe the speedy, nimble insect has similar attributes to his electric car. To market it, Mr. Lu is considering opening showrooms in major Chinese cities, backed by a platform to sell online.

Elon Musk “is someone I can learn from,” he said. “Tesla has huge symbolic significance because it is the first company to make people believe a business model solely around electric vehicles is possible.”

But, he added, “we are not looking to create the Chinese Tesla.”

When it comes to competing with Tesla, Mr. Lu can count on ample help from the Chinese government.

To bring down costs and spur demand, the state has unleashed a torrent of cash. It has offered subsidies to manufacturers and tax breaks for buyers, and plowed investments into charging stations to make electric cars more practical.

In all, UBS Securities estimates that the government spent $13 billion promoting electric vehicles in 2015 alone. So far, Mr. Lu has financed the K50 through loans and injections of fresh capital, but says he “won’t refuse” government subsidies if they become available.

Some analysts fear the state’s largess could prove as much bane as boon.

China may be recreating the waste and excess in electric cars that has plagued other state-targeted sectors, like steel and renewable energy, without spurring the technological innovation the economy needs to compete. And even though China’s car market is the world’s biggest, it is still unlikely to absorb all of the electric vehicle projects underway today.

“They are fueling overcapacity, with a lot of wasted money, and I’m doubtful that in the end you’ll have a successful electric car industry,” says Crystal Chang, a lecturer at the University of California, Berkeley who studies China’s auto industry policies.

Significant sums have already been squandered. In September, the Finance Ministry fined five companies for defrauding the government of $150 million by fabricating sales of electric vehicles to obtain more subsidies, and several companies have failed to make an impression.

Mr. Lu is certain, however, that the K50 stands out in a crowded field. The car has already gotten some advance buzz; a review on one popular Chinese website praised its design as “beautiful” and “avant-garde” and its body as “very muscular.”

“A big advantage they have is their knowledge of what it takes to build a quality vehicle,” said Jack Perkowski, managing partner of the Beijing-based consulting firm JFP Holdings and a veteran of China’s car sector. “They have a better chance than many others because of that.”

Mr. Lu is counting on it.

“There are a lot of electric vehicle companies and hot projects attracting a lot of money,” he said. “Not every company and not every car will be successful.”