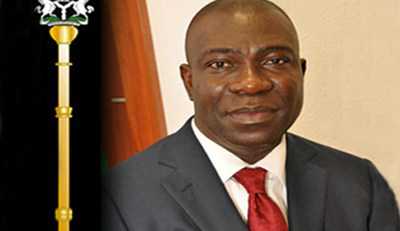 Lawmakers in the West African sub-region under the aegis of the ECOWAS Parliament, on Monday challenged Nigeria to ensure that this month’s general election is free, fair and peaceful.

The charge was the aftermath of the adoption of a motion at the opening of the extraordinary session of ECOWAS Parliament presided over by its Speaker, Senator Ike Ekweremadu, in Abuja on Monday.

The resolution followed a motion moved by the parliament’s fourth deputy speaker and a member of Ghana’s delegation, Hon. Simon Osei-Mensah, “pursuant to the protocol relating to the mechanism for conflict prevention, management, resolution, peacekeeping and security, 1999, and its objectives to prevent, manage and resolve internal and inter-state conflicts.”

The motion expressed concerns about the activities of Boko Haram terrorist group in the North-east in this election season and appealed to politicians to avoid inflammatory utterances that can aggravate the volatile state of the nation.
Osei-Mensah said: “The ECOWAS Parliament, aware of the fact that Nigeria is the largest economy in the region and the continent as a whole; “Aware of the recent security challenges occasioned by the terrorist group, Boko Haram, particularly in the North-east of the country; and convinced of the implications of instability in Federal Republic of Nigeria on the rest of the ECOWAS community, call on all political parties to avoid inciting and acrimonious campaigns, and focus on issues affecting the core welfare of the people.”

The parliament also expressed its “support and goodwill for holding of free, fair, and transparent elections, to the government and good people of the Federal Republic of Nigeria.”

It also urged “all parties to gracefully accept the outcome of the elections in the interest of unity, peace, and development of the country and the region.”

The sub-regional legislature also called on the international community to massively support all initiatives that will lead to free and peaceful elections.
The speaker of the parliament was also  directed to forward the resolution of the parliament to the government and people of Nigeria.

In his remarks, Ekweremadu assured members of the international community present at the meeting which included diplomats that the forthcoming general election in Nigeria would be free, fair, and peaceful.

According to him, Nigeria and ECOWAS sub-region were committed to the conduct of a successful a general election in the country.

He said: “Although the primary thrust of this extraordinary session is to discuss the way forward towards strengthening the parliament to effectively handle the new roles bestowed on it by the Supplementary Act on the Enhancement of the Powers of the ECOWAS Parliament adopted by the 46th Ordinary Session of the Authority of Heads of State and Government in December 2014, it is important that we address the issue of the forthcoming general election in Nigeria.

“We have no doubt that Nigeria will be peaceful before, during, and after the elections and that the country and her democracy will come out of the elections stronger. We want to call on the international community to continue to support us, even as we express gratitude to them for the assistance rendered to us so far.”

position would be made known later,” Awojolu said.