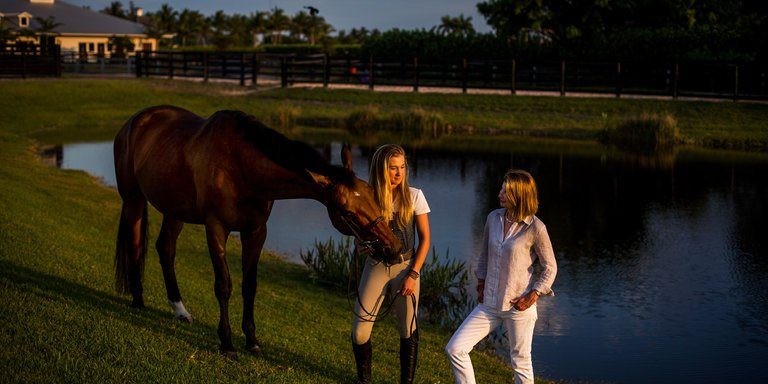 Beyond Soccer Moms: Relocating for a Child’s Sport

The Hill family considers Jackson, Wyo., to be their home, but after spending parts of the last three years in Wellington, Fla., for their oldest daughter’s equestrian training, they relocated there this year.

The move allowed the daughter, Maggie, 15, to compete at the highest level of equestrian competition there and gave her sister, 11-year-old Ellie, a place where she could settle in for middle school.

“You grow out of each area,” said Michael Movalli, the boys’ father. “Dallas has the N.H.L.’s Dallas Stars and it’s pretty popular. But the Northeast is all about hockey. Texas is about football and baseball.”

Shuttling their children around for sports is an enduring ritual for many parents, with the ensuing obligation and obsession that go with it.

But some parents are convinced that for their children to be the very best, it’s not enough to join the local travel team or attend summer sports camps. So they uproot their lives and move to where they believe the center of the sport is. The costs are steep and the dedication is time consuming. Families learn to be flexible when it comes to jobs, living arrangements and other commitments.

The first requirement to push a child to a higher level of sport is a lot of money. When asked about the cost of their sons’ hockey training, Dawn-Marie Movalli laughed. “An arm and a leg,” she said.

Her husband said $10,000 a year would be on the low end. But that is just for the hockey program and skates. It does not include the two homes they maintain and the costs associated with traveling to games, which could require hotel stays over a weekend and hours on the road or in an airplane. The Movallis rent a home from another family who uprooted their lives for a child: Kiley McKinnon, an Olympic snowboarder who trains in Park City, Utah.

Each sport has its own expenses. Jane Hill declined to say how much her daughter’s riding cost, but said they owned and leased several horses and traveled around the southeastern United States for competitions. Maggie said she could ride four or five different horses in a competition.

Because these athletes are still children, parents are likely to pay for private school or tutors. Maggie Hill is taking high school classes through an online program at Laurel Springs School and working with private tutors in Wellington.

There are also private schools geared toward children who want to focus on athletics. They often charge the same rate as top New York private schools: Tuition is $54,000 at Stratton Mountain School in Vermont, which focuses on winter sports, and $59,000 at Spire Academy in Geneva, Ohio, which specializes in basketball, track and field and swimming.

In some sports, children can pay their own way. Brock Crouch, an 18-year-old based at Mammoth Mountain, Calif., several hours east of San Francisco, has been snowboarding since he was 3. His sponsors have paid his travel expenses for the past three or four years.

But that did not cover all the financial obligations, said Denise Crouch, his mother. She lived with her son in Mammoth Mountain while he trained, while her husband and other son were 400 miles away in Carlsbad, Calif. “You still have two houses with expenses,” she said.

And there are other indirect costs.

Parents need flexible jobs. The Movallis, for instance, own their own technology company, Orion Systems, which allows them to work remotely and travel back if necessary. Ms. Crouch said when her son was starting out, she was allowed to work remotely for three months a year in Mammoth. But after Brock began to travel internationally for competitions, her husband quit his job of 20 years working for a commercial contractor so he could travel with him.

Ms. Hill said her husband, Thomas, the chief executive of Summit Materials, a building materials company, commuted to Denver, where the company is based.

There are often other children to consider, too. In some of these families, younger siblings followed older ones into the same sport.

Justin Movalli started playing hockey a decade ago. But it was his younger brother’s interest that was the impetus for the family to move to Connecticut so Connor could get started at the elite level sooner than his brother had.

But some siblings never develop the appetite. Ms. Hill said their younger daughter enjoyed riding a horse when they lived in Wyoming but did not share her sister’s passion for the sport. But she said moving to Wellington, where Maggie trained, had brought everyone together. “Florida is the place where we could rebalance our family,” she said.

For many of these families, relocating can save on travel costs.

Justin Movalli said he moved to Kansas City at age 17 to play hockey and live with a family there. His parents paid a fee to the host family, who receive about $500 a month for taking in a young hockey player. But then he was bused all over the Midwest to play games. His younger brother benefits from living in Connecticut, where his games are closer to home.

After all of the expenses and time spent, there is no guarantee of professional success. Managing expectations can be among the costliest things to do.

The sports schools say they are, in some ways, the managers of overinflated expectations. They essentially serve as curators of talent, placing one child athlete into the mix of others who may be more gifted.

“We’ll get 200 inquiries a year and we’ll assess them,” said Christopher G. Kaltsas, head master of the Stratton Mountain School. He stressed that the program, which accepts about 40 applicants a year, was not going to turn every student into an Olympian or member of the United States national team. Some would simply go on to top schools with sports programs.

“We’re turning them into incredible athletes,” he said. “But we’re also focused on time management. The application of those traits extends far beyond us.”

Ron Clutter, founder and chief executive of Spire Academy, said the school and its related training facility had 16 athletes in the Summer Olympics in Rio de Janeiro. That’s catnip for parents and children alike.

But he said for many student athletes, the best they might hope for would be playing at a college where they were paying their own way.

“Some parents have grander visions for their kids but don’t understand what the real world is like,” Mr. Clutter said. “They quickly learn there are a lot of athletes around them that are as good or better than they are.”

Brock Crouch said he missed the Olympic team for slopestyle snowboarding by two spots, but he planned to try again in four years. Until then, being a professional in his sport allows him to travel and enjoy himself.

“Right now, I’m making a film for Snowboarder Magazine,” he said. “I envision myself being in a few more movies and having as much fun as I can, being in some contests over the next two years. Then two years before the Olympics, I’ll try to buckle down.”

Justin Movalli said he will be a freshman in the fall at Framingham State University in Massachusetts, where he will play Division III hockey.

“My career has been so all over the map,” he said. “I’m happy how it turned out.”