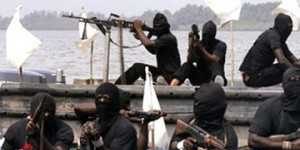 Families of the five PaKistani nationals on board an oil vessel, MT Matrix 1 abducted last Saturday 40 nautical miles off the Bayelsa coast have told the management of the company, Matrix Energy, Warri, Delta State, not to pay any ransom to the abductors to get them released, promising that they would kill Nigerians in their numbers anywhere they are found in their country.

The abducted victims include the Captain, Chief Officer, cook and two others. They were conveying Automated Gasoline Oil, AGO, from Lagos to Eket when they were accosted and abducted by sea pirates off the Bayelsa coast at about 9:pm Tuesday night.

Matrix sources said they have opened discussions with the company, even as the company has informed the relevant security agencies both in Bayelsa state and Warri in Delta state of the incident.

Details of negotiations with the company on ransom amount were not disclosed but it was learnt authoritatively that the families of the kidnapped victim had instructed that no ransom should be paid to secure their freedom, adding that if they kill any one of them, they shall take revenge on Nigerians in their hundred in Pakistan.