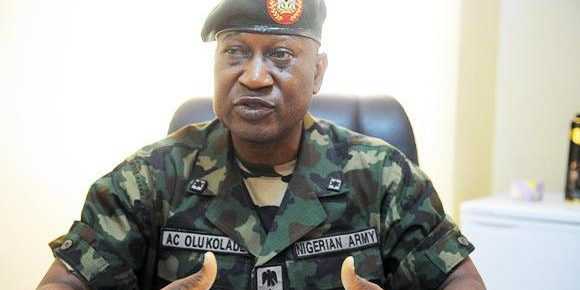 The Defence Headquarters (DHQ) denied yesterday that some commanders in the Northeast and Boko Haram insurgents were working together – as alleged by a “soldier”.

The DHQ said impersonation could not be ruled out to create wrong impressions for the public.

The Director of Defence Information, Maj-Gen. Chris Olukolade, who spoke with our correspondent in Abuja, said the military was probing the purported confession of “a soldier” in an interview with the Voice of America (Hausa Service).

Gen. Olukolade said: “Ordinarily, the Nigerian soldier is too disciplined to be involved in that kind of utterances on radio.

“Let no terrorist propagandists hide under the guise of not wanting to disclose their source to present impostors as representing Nigerian soldiers.

“We do not agree that he is our soldier; we believe very strongly that he is not our soldier. We are still studying the interview to confirm the motive.

“At the moment, we suspect that the intention is to create wrong impressions and cause disaffection.

“A case of impersonation cannot also be ruled out. We are taking the information seriously despite the fallacies contained in it. We do not believe he is one of our soldiers.”

In the interview, the “soldier” said he had witnessed incidents that suggest some commanders are working with Boko Haram.

He described how his military unit, based in Borno State region, was ambushed by Boko Haram fighters.

The soldier, who did not want to be identified, said the commander of a nearby military unit, based in the town of Bama, recently sought assistance from his unit in carrying out a raid.

When the troops reached the battle area, the soldier said the commander of the better-equipped Bama unit suddenly withdrew his forces, leaving the remaining troops to fend for themselves against Boko Haram fighters.

Speaking in Hausa, he said: “We had only light arms and our men were being picked off one after the other.”

The soldier also said he recognised some of the Boko Haram fighters as his former military trainers in Kontagora, a town near the capital, Abuja.

“We realised that some of them were actually mercenaries from the Nigerian army… hired to fight us,” he said.

This soldier and others have said that too often, commanders have pocketed money that was supposed to be used to help equip units, the VOA claimed.

In a January 2012 speech, Nigerian President Goodluck Jonathan said Boko Haram members have infiltrated his government’s executive, legislative and judicial sectors, as well as the police and armed forces.

Jonathan has declared a state of emergency in three northern regions where Boko Haram is active, and launched operations to destroy the group’s camps. Despite those efforts, though, large-scale attacks have continued.

“It certainly would not surprise me that it is happening,” said Pham.

Pham said the goal should be to figure out how and why collaboration between military officers and terror groups could happen.

“What’s critical is to understand, if there is this collusion, to understand whether it is a collusion born of corruption, born of desperation simply to avoid combat that would result in casualties for the men under your command, or if it is born of ideological sympathy with the insurgents,” he said.

Apart from some well-trained elite units, Pham said most of Nigeria’s military is “woefully underfunded and under-resourced” in terms of equipment and training.

E.J. Hogendoorn is deputy director of the International Crisis Group’s Africa programme. The group recently released a detailed report about the Boko Haram insurgency in Nigeria.

He said Nigeria’s military disfunction is part of a broader problem of systemic corruption extending through most government sectors.

Hogendoorn says “drivers”, such as bad governance and the inability of state institutions to provide basic services, help create a pool of unemployed youth “ripe for radicalisation”.

“We argue that even were Boko Haram to be defeated, if you don’t deal with those drivers, you are not going to be able to stabilise either northern Nigeria or the entire country,” he said.

Hogendoorn said for change to occur, the Nigerian government needs to address corruption and poor governance in a systematic and sustained way.
Print Friendly