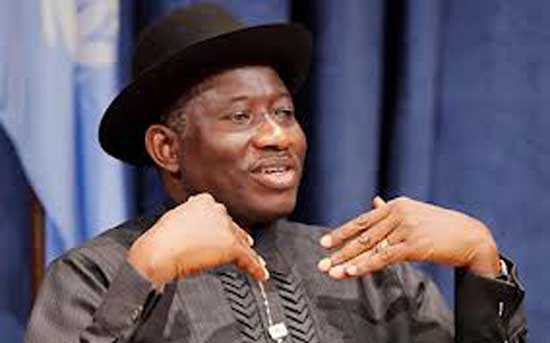 George Agba
President Goodluck vowed yesterday that security forces in  the country would adopt whatever means to totally end the sourge of  terrorism and other gory activities of the Boko Haram sect.
The president, LEADERSHIP gathered, had on Tuesday morning shed tears  when he got the news of the gruesome killings of about 43 students in  Yobe State before issuing a statement in which he opened verbal fire on  the insurgents.
He spoke in a live broadcast last night on national television and  radio to mark the nation’s centenary celebrations, which kick off today  at the International Conference Centre by 9am.
LEADERSHIP also learnt that some of the 28 heads of state and  governments billed to attend the event arrived yesterday, amidst tight  security in the Federal Capital Territory.
Jonathan said during the live broadcast that the centenary  celebration is the best thing to happen to the country at this critical  period in the history of the country.
Assuring that Boko Haram and their gory activities would be wiped out  permanently, he said: “We will continue to do everything possible to  permanently eradicate the scourge of terrorism and insurgency from our  country.  We recognise that the root cause of militancy, terrorism and  insurgency is not the strength of extremist ideas but corrupted values  and ignorance.
“My dear compatriots, as we celebrate our centenary, the security  situation in some of our north-eastern states sadly remains a major  concern for us. Just yesterday, young students, full of hopes and dreams  for a great future, were callously murdered as they slept in their  college dormitories in Yobe State. I am deeply saddened by their deaths  and that of other Nigerians at the hands of terrorists. Our hearts go  out to their parents and relatives, colleagues and school authorities.
“That is why our counter-terrorism strategy is not just about  enforcing law and order, as we have equipped our security forces to do.  It also involves expanding economic opportunities, social inclusion,  education and other measures that will help restore normalcy not just in  the short term but permanently.
“I want to reassure Nigerians that terrorism, strife and insecurity  in any part of Nigeria are abhorrent and unacceptable to us. I urge  leaders throughout Nigeria to ensure that ethnicity and religion are not  allowed to become political issues.”