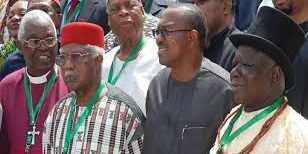 STATESMEN, prominent leaders of the three geo-political zones of the Southern part of the country, under the aegis of Southern Nigeria Peoples Assembly, SNPA, rose from a meeting yesterday, with a strong condemnation of insurgency in some parts of the country, warning that it would not be ruled by a government that would be a product of insurgency or blackmail against President Goodluck Jonathan.

According to the group, no amount of intimidation by the insurgents and their sponsors would force

President Jonathan to abdicate the powers given to him or refuse to seek re-election.

The leaders, who called on President  Jonathan to urgently close the borders with neighbouring states, warned: “Let it be known that the people of Southern Nigeria shall not allow themselves to be ruled by any government that is a product of insurgency or blackmail if the sponsors of insurgency in this country think they can brow-beat and pummel the government of President Goodluck Jonathan to abdicate the authority and mandate freely given to him by Nigerians to rule this country.”

In a communique signed by Clark, Gbonigi and Ikedife, the SNPA, with members drawn from the South South, South East and South West geo- political zones, declared its unflinching support for President Jonathan on his resolve to employ all means and power at his disposal to stop Boko Haram insurgency.

It stressed that the closure of the borders would forestall the continuous infiltration of Nigeria by mercenaries.

The leaders resolved to meet with the leadership from the North to cross-fertilise ideas and urged the governor of Borno State, Kassim Shettima, local government chairmen in the state, traditional rulers, prominent citizens and the security agencies in the state to take full responsibility for the rescue of the over 225 abducted girls.

The communique said: “We declare our unequivocal and unflinching solidarity with President Goodluck Jonathan on his declared resolve to employ all means and power at his disposal to bring the Boko  Haram insurgency to an end.”