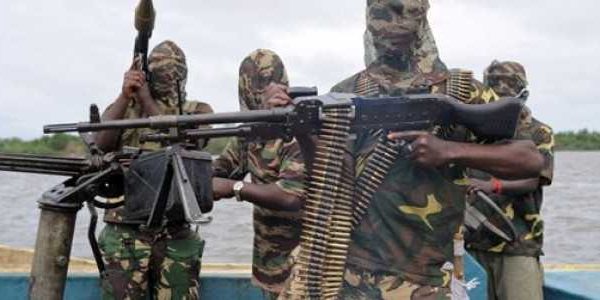 There is no end in sight to the war of words between the Movement for the Emancipation of the Niger Delta (MEND) and the Joint Task Force (JTF) Operation Pulo Shield as the latter has vowed to clamp down on the former over its activities in the Niger Delta region.
Reacting to the claims by MEND that it was behind the killing of soldiers in a community between Rivers and Bayelsa states and the hijack of a vessel and kidnapping of two American sailors. JTF described those behind MEND as drowning gangsters feeding Nigerians with fabricated stories.
The media coordinator of JTF, Lt. Col Onyeama Nwachukwu while reacting to the pronouncement maintained that MEND did not cause the fire incident at the Warri Refinery and argued that the soldiers killed in Andoni Local Government Area of Rivers were not killed by MEND soldiers.

Nwachukwu stated that the JTF would soon descend on MEND just like it has been able to smoke out other criminals causing instability in the region in the recent past.
His statement read in part: “These claims are a reflection of the grandiose illusion of drowning gangsters.
“It is no longer news that their insatiable and desperate desire to conjure up a seeming apocalypse in order to make the world see the Niger Delta as insecure has again failed, as they have continuously fed the public with lies of a grossly failed ‘Hurricane Exodus.’
“The NNPC Warri refinery fire incident, which the NNPC have clearly stated was accidental and occurred when their engineers were working in the top unit of the refinery, is a crystal clear example of the false claims of these criminals.
Our troops in the Andoni incident defended the civilians they escorted gallantly by ensuring their safety. How come the so called MEND did not claim responsibility before now as they would have usually done?
It is simply because they had no knowledge of it until we made it public and ridiculously they have jumped at it for self glorification.
“This claim is therefore an afterthought. The Merchant vessel named Retriever hijacked off the coast by unknown pirates was not at all escorted. It is a Merchant vessel, which had no escort and no JTF presence, how then could JTF have suffered casualty in that incident?”he asked.