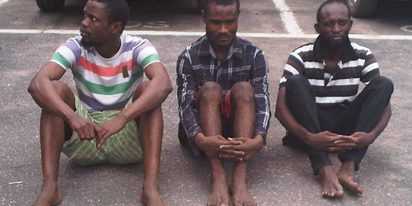 Nwike was kidnapped on March 19, 2013 and a N30 million ransom was demanded by his abductors who reportedly murdered him after taking N5 million as ransom.

Parading the suspects alongside four others, among whom were three Ibadan‑based alleged hired assassins, who confessed to have been given N140,000 as advance payment to eliminate a businessman in Lagos, the Lagos State Commissioner of Police, Umar Manko, said the arrest of the kidnap suspects followed the arrest of one Monday Odieto in Benin, Edo State, by the Divisional Police Officer in‑charge of Ikoyi, Aisha Haruna.

How they were nabbed

Manko explained that during interrogation, Odieto confessed to belong to a 30‑man kidnap gang operating in the South‑South and South‑East axis of the country and further confessed to have been involved in the kidnap of a Supreme Court judge’s wife, Justice Rhodes-Vivour, last year along the Lagos/Benin expressway.

His confessional statement, according to Manko, led to a manhunt for those indicted. He said the pursuit led to the arrest of Godspower Ovwigho, 31, and Stanley Efetobor, 29. He said they were arrested by operatives of the Special Anti‑ Robbery Sqaud.

Manko said: “After a long manhunt, one Godspower Ovwigho, was tracked and arrested at Ikorodu, Lagos State on April 23. He was identified by Monday Odieto as being a top ranking member of the gang. On April 24, one Stanley Efetobor, who is also a gang member, was also arrested by SARS.”

During interrogation, the suspects, according to Manko, confessed to be among those who ambushed some prison officials in Okere, Warri, Delta State while their leader, simply identified as Rufus was being taken to court in March last year. Some prison officials were reportedly killed in the attack.

According to him, “Efetobor confessed to be a member of the gang that rescued one of their former gang leaders, one Rufus, at Okere raid in Warri, Delta State.

“He also confessed that their gang kidnapped the wife and daughter of Justice Rhodes-Vivour. The same gang kidnapped former Anambra deputy governor and demanded N30 million as ransom. Although they got N5 million from the family, they still killed the man and told the wife to use the remaining N25 million to bury her husband. But we are still continuing with our investigations.”

Why we killed former

Godspower Ovwigho, 27, told a bewildered crowd that his gang killed the former deputy governor because his wife was heady.

According to him, “we killed the deputy governor because his wife tried to prove difficult. We demanded N30 million but they gave us only N5 million. After the payment, they promised to give us more but did not. It was Rufus that shot him dead when the wife refused to pay more. Rufus is our leader.

“We held him hostage in a three-bedroom flat in Kokori town, in Delta State. When the negotiators brought the money and Rufus discovered it was N5 million, he drove all of them away. He, thereafter, charged into the bedroom where the deputy governor was and told him that his wife was daring us.

“He called the victim’s wife on the phone and asked why the money was slashed. She told him that was all they were able to gather. Out of anger, he shot the former deputy governor four times and called his wife again on the phone and told her to use the balance to organise his burial.”

His alleged partner in crime, Stanley Efetobor, 29, lamented that his share of the N5 million was only N40,000.

Meanwhile, the three suspected hired assassins who left Ibadan for Lagos, to snuff life out of a businessman, one Victor Adelakun, disclosed that they were promised N140,000 after executing the job.

The suspects, according to Manko, were arrested in a night club on Allen Avenue by operatives of SARS on May 10, 2014 while strategising on how to get their target.

But the trio of Ibrahim Lawal (27), Emmanuel Adewale (25 ) and Yomi Olarewaju (25) claimed they intended kidnapping their victim.

Although in an earlier interrogation, they reportedly told the operatives that their mission was to assassinate their victim. But Ibrahim stated yesterday:

“We wanted to kidnap him. That was the instruction given to us. We were promised N300,000 if the deal succeeded. We were given N100,000 as advance fee

“We were just at the club waiting for the victim because we were told he usually drinkthere. While we were discussing how to get him, we did not know how the Police got wind of our mission and apprehended us.”