We are seeing hell – Borno Elders 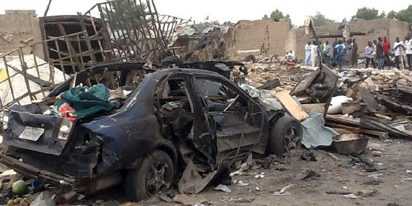 The Bornu Elders, Monday gave a graphic details of how life in Borno and the entire north east has been reduced to hell by the activities insurgents.

Addressing a gathering of Northern Elders Forum in Kano, Zanna Hassan Boguma who delivered a goodwill message on behalf of Borno Elders Forum declared that the entire region is now engaged in full time war from enemy within.

Boguma stated that “we have been seeing hell, our people are constantly decimated, our towns and villages razed, properties destroyed, schools and places of worship burnt, even innocent travelers were not spared” .

The elder stateman said that from the inceasant attack that the axis had witnessed in the last weeks was a confirmation of how vulnerable the entire region is.
He disclosed that the region has been turn in to a war zone with attendant humanitarian crisis, stressing that this is the time the whole country should mobilized to stop the carnage.

Boguma who doubted the intention of the perpetrators of this crime against humanity in the region was quick to add that “much as we know, the whole matter has nothing to do with claimed intention of a section imposing their will on the others, or issues of sharia or making the country ungovernable for the President or a religious war as they want to look at it”.

He however accused the Federal Government of lacking the political will to address the crisis, pointing out that Borno Elders is surprised at the grave yard silence of Government and its inability to implement several report on the insurgency turned in by expert engaged to do so by the same Government.

The Borno Elders noted that the solution to the crisis does not lie with the PDP or APC, maintaining that the situation at hand transcend politics and urged the entire Country to identify with them at the moment of need.

This catastrophe which has befallen us should be the concern of all Northerners irrespective of tribe, region, or creed. Those of you who are residing far away shold know that other citizens needed your sympathy and attention”.

Boguma posited that “until those who were namd as supporters, financiers, and alliesto the Boko Haram were brought to justice, untilthe political Boko Haram were apprehended and prosecuted, until the operations to contain this madness is sincerely handled, lives of our innocent villagers will continued to be sacrificed”.