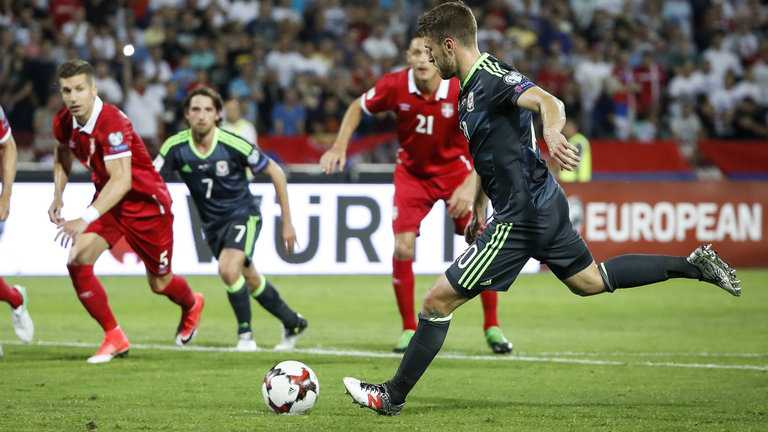 Aaron Ramsey scored a Panenka penalty against Serbia in the same stadium where the technique was first made famous.

The Wales midfielder put his country ahead in the first half at the Rajko Mitic Stadium, the same venue where Antonin Panenka beat German goalkeeper Sepp Maier at the 1976 European Championships.

Unfortunately for Chris Coleman’s side, history was to repeat itself in another way as Aleksandar Mitrovic once again denied Wales a World Cup Qualifying win.

“I didn’t know, but that is quite a nice touch,” Ramsey said when told about the famous penalty, which was also scored at the same end.

“I felt calm, I felt confident in the situation. The keeper asked for the ball so I gave him the ball and he said, “I’m going to stay in the middle, you’re going to go down the middle. So I went in the right hand corner. Thankfully it went in.”

The Newcastle forward – who scored a late leveller in the reverse fixture in Cardiff in November – tucked home a 73rd-minute equaliser on Sunday to earn a 1-1 draw.

They face Austria next at home in September but will be without the suspended Joe Allen after the midfielder picked up a booking in Belgrade.