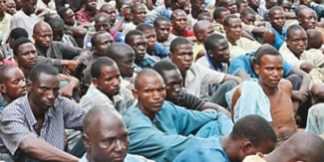 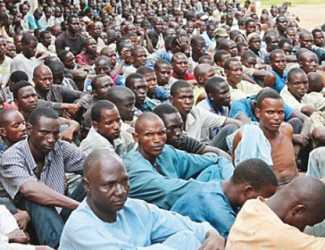 The Defence Headquarters said yesterday that a wanted terror suspect was among the 486. It also said other security agencies and para-military organisations had joined the ongoing screening of the suspects. The Director of Defence Information, Gen. Chris Olukolade, in a statement last night in Abuja, said:

“A terror kingpin on the list of wanted terrorists of security forces in Nigeria has been detected in the ongoing screening of the 486 suspects nabbed while travelling in over 33 Hiace Hummer buses at night along Enugu-Port Harcourt Expressway last Sunday.

“So far, other security agencies including the para-military have joined “the screening exercise to ascertain the status of the remaining suspects.

“Those identified as possible security risk or illegal immigrants are expected to be identified for further action.

“Meanwhile, the identified terror kingpin has been taken into custody.  Further development will be communicated to you in due course.”

Although the statement was silent on the wanted  kingpin, the defunct Joint Task Force (JTF)  on November 23, 2012  placed ransom on 19 leaders of Boko Haram.

It was not immediately clear if the arrested suspect is in the category of the wanted 19.

The list  had five members of the Shurra Committee (the highest making body of the sect) and 14 Boko Haram commanders.

But one of the Shurra  Committee members, Mohammed Zangina(a.k.a Mallam Abdullahi/Alh. Musa), with a N25million ransom, was allegedly killed in a shoot-out with the Joint Task Force(JTF) in Maiduguri.

With Zangina dead, those still wanted and the ransom on them are: Imam Abubakar Shekau (N50million); Habibu Yusuf (a.k.a Asalafi) N25million; Khalid Albarnawai ( N25million); and Momodu Bama (N25 million).

The fate of Momodu Bama is unknown following conflicting reports on whether he is alive or dead.

Security agents are baffled that most of the 486 Boko Haram suspects arrested in Abia State do not know Port Harcourt, the Rivers State capital where they claimed to be heading to.

Besides, they did not know their mission in the Garden City, a source close to the investigation told The Nation.

The suspects were arrested on Sunday by officers and men of the 144 Battalion in Asa, Ukwa west Local Government Area.

They were travelling in 35 buses at about 2.am.

“Our investigators had been looking at a crucial bend: What would have informed such number of people at a go when there was no pending major activity in Port Harcourt,” a source said, pleading not to be named.

“The probe became more curious upon discovery that some of them escaped in two or three buses. If you have nothing to hide, why running away from the military or security agencies.

“Some of those grilled admitted that they don’t know what they were going to do in Port Harcourt and they have never visited the city. They said they cannot find their way to Port Harcourt.

“So, they cannot really confirm where they were heading to and what they were going to do. These facts came out of the preliminary grilling of the suspects.”

But the source noted that it was still early to conclude that the suspects were actually Boko Haram insurgents or not.

Only a comprehensive investigation, which is going on, can reveal the true identities of the suspects, it was learnt.

“We will trace them to their take-off point; their families; their mission and their sponsors. Definitely, they started their journey somewhere,” the source said.

The source also said “the idea of claiming that Northerners were arrested could ignite tension nationwide as if the military is isolating them for a purpose.

“We are not against Northerners moving to any part of the country. But alleged security breach, especially suspicious movement in the dead hours of the night cannot be discountenanced,” he said, adding:

“We appeal to Nigerians to see the security challenge facing the nation as a common problem which we must collaborate to tackle.

“The military will release its findings to the public. If they have a genuine mission, then we will release them and give these people security advisory on their movement next time.

“And if they are on a dangerous mission to Port Harcourt, the law will take its course, with fairness to all. The ultimate objective is to secure every part of Nigeria.”

Security agencies are probing also Boko Haram’s purported letters to Chibok community in Borno, some villages in Jos and some parts of Benue State, sources told The Nation yesterday.

Besides, security has been strengthened in all “mission areas”, especially frontline places in the Northeast.

According to highly-placed sources, the military and security agencies were not dismissing Boko Haram’s letters to Chibok, Jos environs, and some parts of Benue State.

Although in terms of intelligence gathering, the letters could be phantom to divert attention of troops, the military high command has issued red alert to all formations in the Northeast to ward off any aggression.

The military is said to have intelligence report confirming that the letters were sent to Chibok, some environs of Jos and some parts of Benue State.

“We will not take anything for granted. In line with our operations generally, every portion of the mission area is important,” said the source, who added:

“So, the military high command has ordered all formations to beef up security in Chibok, targeted areas in Plateau and Benue states and all frontline areas in the Northeast.

“Following the ambush tactics of the insurgents, all military formations and security posts are on red alert.”

Responding to a question, the source said: “Going by the modus operandi of Boko Haram, the letters could be phantom because they had been striking without notice.

“This is why we are also probing the sources of the letters to ascertain whether it was sheer propaganda or a tactical way of diverting the attention of the troops. Some elements may take advantage of the security challenge to heighten tension.

“We will get to the root of these letters and subject them to forensic examination. In any case, troops are on the alert to avoid being caught off-guard.”

On the plan to rescue the Chibok girls, who have been in captivity in the last 65 days, another source added: “The military is repackaging its approach to come out in a hard way against the insurgents.

“We are preparing for a major bang, if it will get to this stage, to rescue the girls. You will recall that there had been a lull in the past few weeks; it is because the military is also re-strategising.”