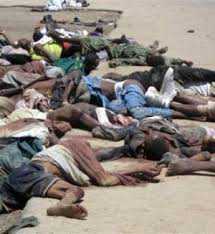 Scores of gunmen suspected to be members of the Boko Haram terrorist sect were yesterday killed by vigilance youths, known as Civilian JTF, and the military in Kawuri village, Bama Local Government Area of Borno State.

This was even as residents of Attagara village, in Gwoza Local Government Area of the state on Friday repelled an attack on their community by the dreaded sect, killing seven of the invaders. Kawuri village has a direct link road to Sambisa Game Reserve, where the terrorists have several camps, from where they have been launching attacks on hapless villagers.

Early this year, over 100 people were killed when the terrorists invaded the village, leaving property worth millions of naira destroyed. Our correspondent gathered that the armed gunmen had invaded Kawuri about 1am, using three Hilux vehicles and several motorcycles.

They were, however, repelled by the Civilian JTF and some military troops deployed to guard the village. A vigilance youth, who took part in repelling the attack, Mallam Mamman Yakubu, said scores of the terrorists were killed in the failed attack.

“We were able to kill many of the terrorists who invaded our community yesterday night. About 1am, they came in droves but with the assistance of the security operatives and residents, we repelled the attack.

“The attackers were very quick in picking up the bodies of their dead colleagues on the streets. Even at that, this morning, there were three dead bodies of the attackers recovered while many died in the bush when we pursued them through the Sambisa forest,” Yakubu said.

Yakubu said the villagers were not interested in the arrest of the insurgents, but to kill them. According to him, arresting Boko Haram suspects will not solve the war against terror because their members hardly give information on their modus operandi after being arrested.

He noted that none of the villagers was killed and no house or property destroyed by the terrorists, stressing that they had already got wind of the planned attack, which made them to pray and prepare against the attackers.

Also in Attagara village, which is a border community with Cameroun, seven Boko Haram members were killed by the villagers. Our correspondent learnt that the attackers invaded the village on motorcycles but met some women as they were entering the village.

“They wanted to hit the women with the sticks in their hands but the women resisted. Three of the insurgents fled, but seven were not lucky as the women alerted the people,” a resident of the area who returned to Maiduguri yesterday told journalists

He said the vigilance group in the community rushed to the scene and disarmed the seven insurgents, who were immediately lynched by the residents who also destroyed their motorcycles. “Seven of the insurgents died,” he said.

Meanwhile, the Limankara border community yesterday petitioned President Goodluck Jonathan and the Inspector-General of Police, Mohammed Abubakar, over the recent attack that claimed several lives and property by the insurgents.

The community said that the petition, signed by the District Head, Alhaji Abdulkareem Wahab; Ward Head, Mr. Zephaniah Tada, and three other representatives, John Mark Hodo, James Dauda Chihwa and Aliyu Usman Kutho, had become inevitable in view of the incessant attacks by the insurgents. The petition accused the National Mobile Training School located in the community, of complicity in the attacks.

“The Commandant of the National Mobile Training School, Limankara, (name withheld) connived with insurgents to attack and kill members of the community for four hours without arresting any, as he directed policemen in the school not to come out and confront the insurgents and stop them from destroying lives and property. “The Boko Haram gunmen stormed our village through the Sambisa forest en route Jaje road that links National Mobile Training School.

They operated from 1am to 5am on Saturday, destroying several houses, vehicles and our local church near the district head’s residence, and went back into the forest unhurt. “If soldiers from Adamawa State did not intervene, the insurgents could have killed many of us. “We don’t know whether the commandant is working with Boko Haram or protecting lives and property of Nigerians in Borno State.

“The gunmen came into the village through the training school and went back through the same route, while 200 mobile policemen are on the school premises. “The commandant directed the policemen not to ambush the insurgents, as they did not come to attack the school or its students.

“When the community is in distress or fear, the police are supposed to protect us, just like when the school was in need of any help or assistance from members of this community.

“This Mobile Training School had been in existence for 32 years in Limankara, but the Commander had been assisting Boko Haram; it is necessary for the policemen to leave us alone without the school,” the petition said.