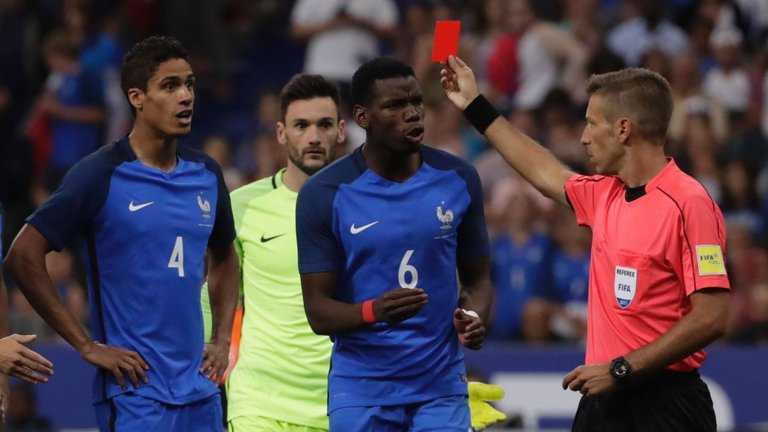 FIFA’s Head of Refereeing expects video referees to be used at next summer’s World Cup and rejects claims they are undermining the credibility of match officials.

France’s Raphael Varane was controversially sent off against England on Tuesday night after the referee consulted his video assistants.

A final decision on whether to introduce further technology at Russia 2018 will be made by the game’s lawmakers, the International Football Association Board, early next year.

“Referees aren’t losing credibility, I think it takes time. They don’t want to commit mistakes and they always want to be correct during the game. They have a lot of pressure but we like pressure.

A referee without pressure is not a good life. At the end I think referees understand it’s for their career, not against it.”

The Football Association intends to introduce Video Assistant Referees (VARs) from the FA Cup third round next season.

The use of video officials will apply to four categories of match-changing incidents: awarding goals, penalty or no penalty, direct red cards (not second yellow cards) and cases of mistaken identity.

Busacca would welcome tests in other competitions, including the Premier League.

“I have at my disposal the crème de la crème in the world,” he said. “If, every weekend, you can have a top referee and two top video assistants, let’s do it. But if you think that you need time to implement, it’s better to wait a little bit.”

But FIFA’s senior refereeing official would prefer the rule to stay in the game.

“Yes, sure,” replied Buscacca. “At this moment that is my opinion. But I always respect the opinion and ideas from the others. Then if it’s not a good one, let’s see. But we have always to respect people that have ideas.”

“It’s not sport,” he added. “It’s not respecting referees and it’s not correct. If someone is under pressure, we have a limit. We have to give a message that even in some situations, even if you are sure a foul was committed against you, you have to show respect.”

Busacca was asked whether former Premier League referee Mark Clattenburg’s move to Saudi Arabia would have any impact on his chances of officiating at next summer’s World Cup.