EVIDENCE THAT SHOWS BUHARI AND DSS CRIMES AGAINST HUMANITY 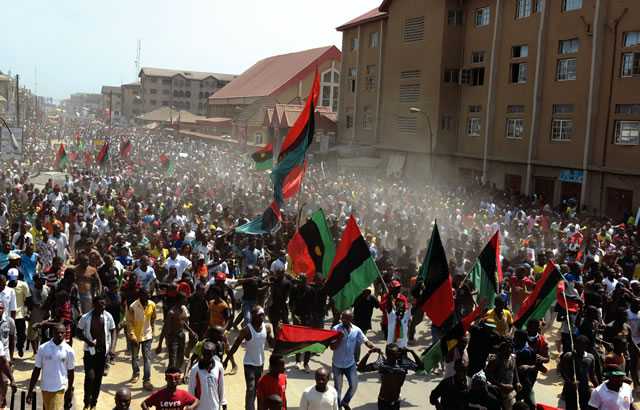 ON JANUARY 19, 2016 The Nigerian armed forces in the military opened fire on innocent peaceful Biafrans who were praying in the open field of the National High School Aba, killing over 20 persons and burning their bodies trying to hide the evidence but as nemesis will catch up with them a shocking video popped up on the internet clearly showing the invasion of the school ground by the Nigerian armed forces and shooting at the biafrans including women who were only singing and praying for the release of Nnamdi Kanu

This video really shows how human and civil rights are being abused in Nigeria, this huge crimes against humanity shows how much lives is being lose on a daily basis from the hands of the Nigerian security operatives who are suppose to be protecting lives, it is no longer surprising that buhari and his men are blood hungry suckers and will do anything to carry out another genocide on biafrans

The Indigenous People of Biafra have remained peaceful and non violent in its agitation and have set the record straight as the most peaceful protest ever held in the world despite the large number of people , not a single property was destroyed
in contrast it was the biafrans (IPOB) who was the victim of attack by the Nigerian security operatives, the millitary, airforce and navy. on Jan. 19, 2016, on December 17, 2015 and August 30, 2015 respectively the proof is all over the internet including the video below

Meanwhile the latest joke of the century currently flooding the local and worldwide media is the Nigerian state security services alleging that five hausa fulani was killed and buried by IPOB, such dubious and funny accusation by the DSS is nothing but a fat blatant lie from the pit of hell, it is just another reason to continue killing Biafrans and tagging IPOB as a terrorist organisation but shame to them they have failed.

Speaking of terrorism the fulani herdsmen by report is the worlds 4th dealiest group as posted in the independent .co.uk news website this is no doubt a truthful truth
the fulani herdsmen is as deadly as stated clearly in this publication by the independent, the fulani herdsmen in recent times have been going around maiming and killing people in various part of Nigeria, one of which is the “Agatu Genocide” where over 500 villagers of Agatu local government in Benue state Nigeria.
these men of the underworld who go around with cattles and brandishing AK – 47 assault riffle they massacred over 500 people including women and children *see graphic images below” and nothing was said or done about it, not by Buhari, not by the federal govt of Nigeria not by the so called DSS, simply because they are his brothers, his kingsmen his newphews and cousins.

The so called DSS was silent about it and continued their usual activities like nothing happened, despite recieving worldwide condemation , nothing happened and nothing will happened, none of these terrorits was arrested and none will be areested becuase their uncle Buhari who is also hausa fulani is the so called president, this simply means that they have his support and they should go on to kill and destroy lives and properties.

The video below shows why Nigeria is called a “zoo” by many, in a country where the military opens fire in innocent civilians killing over 20 and burning their bodies in a bid to destroy the evidence only for praying and singing is indeed a zoo.
The video below is a proof that Buhari and his DSS agents are agents of death and supports terrorism.
The below below prooves why the DSS should not be trusted and anything they say no be taken seriously, until they have arrested their brothers who was responsible for the Agatu genocide.

The #DSSUnderBuhari accusation of IPOB killing five hausa fulani herdsmen isnothing but a blatant lie from the pit of hell and holds no ground, it is a mindgame to divert attention from the herdsmen menace in the country.

International organisations, world human rights body and the Amnesty International, International Criminal Courts and the United Nation MUST rise up now against this crimes and brign these blood thirsty demons to book.

Written and Published By Uchechi Collins