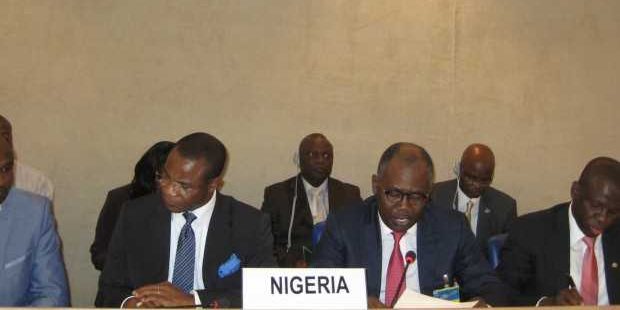 The United States and United Kingdom on Tuesday condemned the Boko Haram insurgency in some parts of country, the extra-judicial killings and acts of impunity of security forces.
They urged the Federal Government at the ongoing United Nations Human Rights Council Universal Periodic Review (UPR) session in Geneva to ensure perpetrators are made to face the wrath of the law, while advising that more proactive ways be explored in resolving security situation and promoting accountability for gross violation of human rights.
They also called for credible and independent investigations into reports on human rights abuses by security members, particularly on detainees during counter terrorism operations.
US said: “We condemn Boko Haram’s horrific attacks on Nigerians, including members of the public and their government. We are also concerned by the reports of Nigerian security forces perpetrating serious human rights violations in their counter-insurgency efforts, particularly against detained in state custody, and we

urge Nigeria to respect human rights in any security response.
“Hold security forces accountable for human rights violations, and establish a system for human rights violations, and establish a system for human rights monitoring to promote accountability for gross violations of human rights.”
While defending Nigeria’s human rights record at the UPR session the Minister of Justice and Attorney General of the Federation, Mr Mohammed Adoke, SAN, said Nigeria has put in place measures to improve the security situation.
According to him, terrorism and violent insurgency such the Boko Haram’s are externally-induced internal adding that the Nigerian Government has kept open communication channels through the activities of a Presidential Committee on Security Challenges towards working out a peaceful resolution of the crisis.
In spite of the difficult circumstances that terrorism generates, the Minister said law enforcement agencies have been instructed to observe human rights while countering acts of terror.
He said other measures have been taken to improve security, including enactment of the Terrorism Prevention Act 2011 and its subsequent amendment in 2013 to broaden the scope of its application; development of a Counter Terrorism Strategy and creation of crisis management centre in the office of the National Security Adviser; coordination of enhanced capacity building for all security and intelligence outfits at both the strategic and tactical levels; the National Security Adviser coordinates efforts among the security and intelligence agencies to ensure protection of the human rights of all persons in counter terrorism operations.
“Let me state here that torture, as a means of extracting information from suspects, has no place in Nigerian law enforcement. In addressing the problem, the government has adopted constitutional measures which include the “declaration of a state of emergency” in the states of Adamawa, Borno and Yobe of the Northeast Nigeria, where the insurgents have their base.
” The Joint Task Force and the Special Task Force have been deployed with the required legislative authorisation to utilise rights-based “Rules of Engagement” and “Operational Plans” in combating the insurgency.
“Government has already proscribed Boko Haram as well as the Jamāʿatu Anṣāril Muslimīna fī Bilādis Sūdān and stipulated a 20-year jail term for anybody who aids or sponsors them in any manner whatsoever. The Government has also put in place an amnesty programme to dissuade terrorists and other extremists from violence, ” the minister stated.