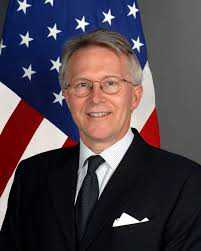 THE United States of America, USA, yesterday, stated why it was yet to release the $7 million bounty it placed on the head of the leader of the Boko Haram Islamist sect, Abubakar Shekau. This is coming 10 days after the Joint Task Force announced that the sect leader had died from gunshot wounds he sustained in an encounter with the task force on June 30.

In June 2012, the US Department of State had designated Shekau a terrorist and froze his assets in America, while offering a $7 million reward for his capture.

Explaining why the US was yet to redeem its pledge on the reward for killing the Boko Haram leader, outgoing Ambassador of the US to Nigeria, Terence McCulley, told newsmen shortly after his visit to the Minister of Foreign Affairs, Ambassador Olugbenga Ashiru, in Abuja, that his country was not fully satisfied with Nigeria’s war against terrorism.

He said: “I can say you are talking about the Reward for Justice Programme, which indeed offers a reward for help in apprehending the leader of Boko Haram.

“But I can’t say that the United States has been very satisfied with the work that has been done in helping to counter the threat of violent extremism in the region.

“But we certainly salute the work that Nigeria has done as a regional leader to contain the spread of violent extremism.”

He assured that fight against violent extremism would continue not only in Nigeria but any country or region that is faced with the menace.

McCulley said: “We have strongly criticised the violence perpetrated by Boko Haram and we have called for measures targeted at checkmating this threat.

“And we express our hope that going forward, the government of Nigeria will be able to contain the threat posed by Boko Haram.”

Meanwhile, Borno State residents have threatened to sue the Federal Government and its security agencies for detaining their relatives and making them inaccessible.

The residents, through a human rights group, Civil Rights Congress of Nigeria, led by Sheu Sani in Kano, said security forces in the state were carrying out night raids in residential neighborhoods.

According to AFP report, distraught relatives have, therefore, asked the army, the police, intelligence services and government officials where the arrested people were to no avail and that no one even knows, or is saying, how many people have been detained.

The rights group said it had received about 3,000 calls from people across northern Nigeria, that loved ones had disappeared after being arrested by the military or police in the past three years.

“The intelligence service says they don’t keep detainees — even though they do— that they hand them over to police. So there is this cycle of confusion. The conditions in which people are being detained is very secretive.”

One Habiba Saadu said his two sons and her daughter were taken on August 3 by soldiers that went from house to house in a night raid in Maiduguri, accusing them of participating in the Boko Haram uprising.

“Up to now, I have never seen my children,” Saadu said.

Saadu said her visits to police stations, the army barracks, the intelligence services and local politicians gave no clue to the whereabouts of her children.

Asked about the disappearance of the suspected Boko Haram members, the Joint Task Force spokesman, Lt-Col Sagir Musa, told The Associated Press that “if they are arrested, then they are being held.”

In its half-year report published last month, the Federal Prison Service said it was holding 202 Boko Haram suspects by the end of June.