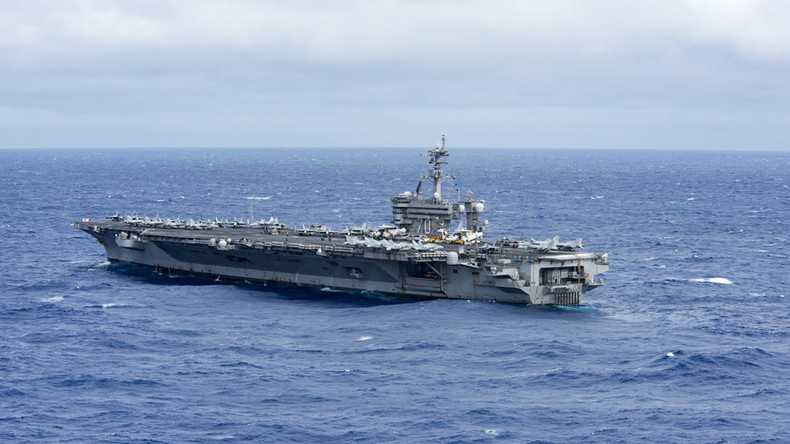 The deployment of the Carrier Strike Group (CSG) 1 began Saturday, just days after China issued a stern warning to stay away from the area.

“China has indisputable sovereignty over the South China Sea islands and their adjacent waters,” China’s Foreign Ministry spokesman Geng Shuang said Wednesday. “China respects and upholds the freedom of navigation and overflight in the South China Sea which countries enjoy under international law, but firmly opposes any country’s attempt to undermine China’s sovereignty and security in the name of the freedom of navigation and overflight.”

Despite the warning, US patrols got underway in the disputed waters, right after an American flotilla held drills off the islands of Hawaii and Guam to “maintain and improve their readiness and develop cohesion as a strike group.”

“The training completed over the past few weeks has really brought the team together and improved our effectiveness and readiness as a strike group,” said Rear Adm. James Kilby, commander of CSG 1. “We are looking forward to demonstrating those capabilities while building upon existing strong relationships with our allies, partners and friends in the Indo-Asia-Pacific region.”

As tensions between US and China intensify, the US Navy appears to continue disregard Beijing’s interests in the immediate proximity of the disputed islands, claiming the moves are designed to ensure the principles of freedom of navigation in international waters.

The Spratly Islands, or Spratlys, comprise more than 750 islets, atolls, and reefs, and lie off the coastlines of Vietnam, the Philippines, Malaysia, Brunei and China, with all the claimants having their own national names for the archipelago. Beijing persists in claiming the reefs in defiance of a ruling issued by the Permanent Court of Arbitration (PCA) at the Hague.

While freedom of navigation and military drills accelerated under President Barack Obama’s administration, Trump and his team appear to be heading on a collision course with China.

US-China relations, already frosty over the disputed South China Sea islands, became more strained after Trump’s phone conversation with Taiwan’s President Tsai Ing-wen, which immediately followed the Republican’s victory. The exchange infuriated Beijing, who considered it running against the bilateral protocol of the so-called ‘One-China’ policy, under which Washington views Taiwan as part of China.

And just over the last two weeks, both Trump and James Mattis, the current US Secretary of Defense, vowed to protect Japan in any territorial disputes it has with China in the East China Sea.

The situation has been further exacerbated by China’s militarization of the South China Sea. Chinese State media Xinhua announced on Friday that China’s Navy had completed a week-long exercise there. The “scheduled” maneuvers entailed sudden attack drills and had three Chinese warships participating, including a destroyer.