Uprooted by War, Threatened by Boko Haram and Desperate to Go Home 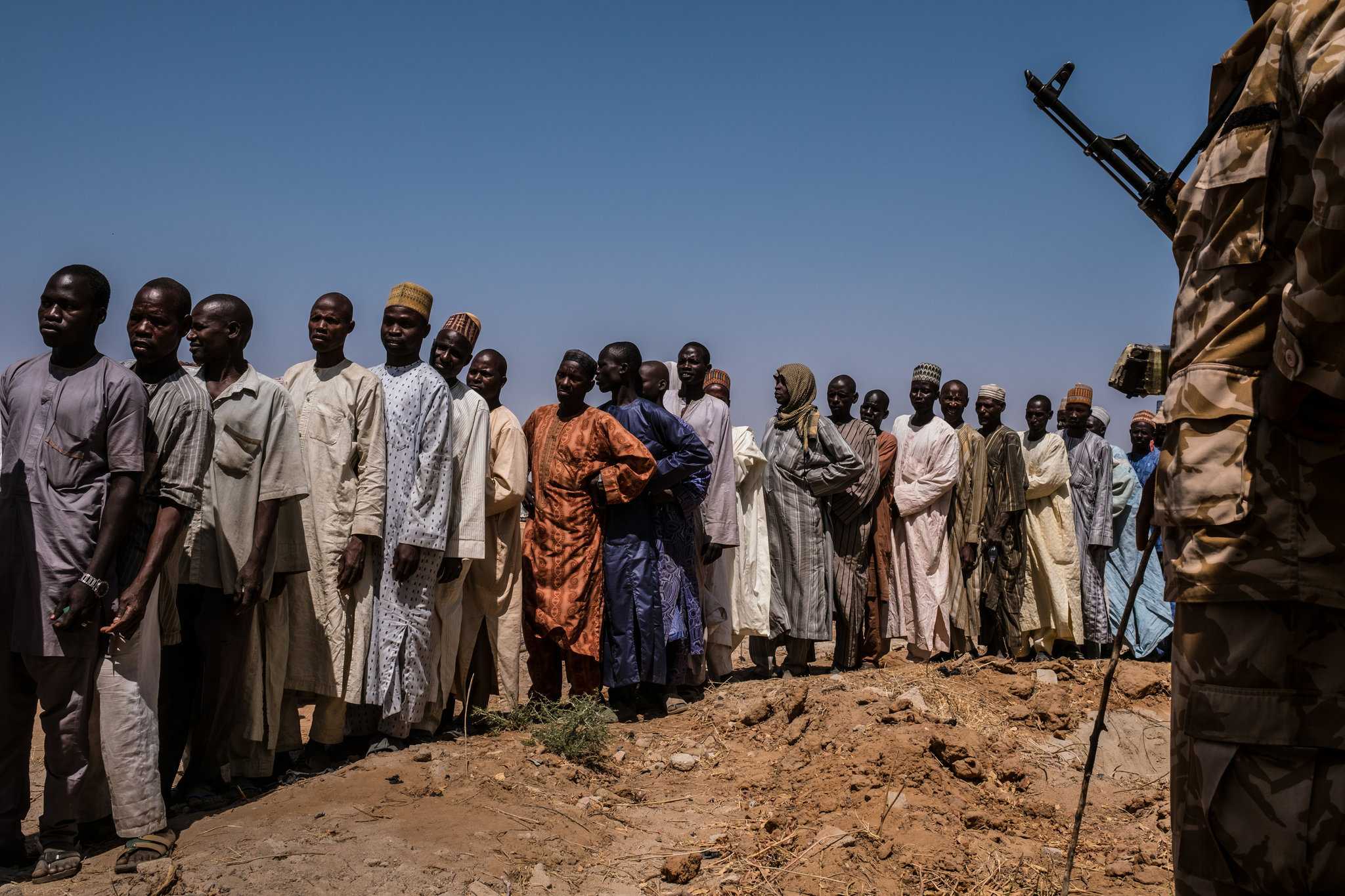 MAIDUGURI, Nigeria — Dozens of drivers lined up in beat-up vehicles stuffed with mattresses, cooking pots and other belongings, clogging a road outside one of the most desperate and dangerous camps that serve as refuge from the war with Boko Haram.

All were waiting for the Nigerian military to escort them back to the farms and the villages they had fled during the yearslong rampage by the insurgents here in this northeast corner of the nation.

The military and the government have proclaimed that the countryside outside Maiduguri, the busy Borno State capital where Boko Haram was born, is mostly safe now. They’ve said it’s time for most of the nearly two million displaced people — many of them farmers and fishermen fighting to stave off hunger — to go home.

But the soldiers were guiding the throngs of people into a future that was no more certain, and potentially just as dangerous, as the past they had fled.

MAIDUGURI, Nigeria — Dozens of drivers lined up in beat-up vehicles stuffed with mattresses, cooking pots and other belongings, clogging a road outside one of the most desperate and dangerous camps that serve as refuge from the war with Boko Haram.

All were waiting for the Nigerian military to escort them back to the farms and the villages they had fled during the yearslong rampage by the insurgents here in this northeast corner of the nation.

The military and the government have proclaimed that the countryside outside Maiduguri, the busy Borno State capital where Boko Haram was born, is mostly safe now. They’ve said it’s time for most of the nearly two million displaced people — many of them farmers and fishermen fighting to stave off hunger — to go home.

But the soldiers were guiding the throngs of people into a future that was no more certain, and potentially just as dangerous, as the past they had fled.

Maimta Modu, 62, had come to a displaced-persons camp with other residents of his tiny village, and now they have to pay soldiers a fee to be escorted back periodically to check on their crops. If he returns on his own, he said in a reference to Boko Haram, “those boys will slaughter me.”

President Muhammadu Buhari has repeatedly declared the war with Boko Haram over. The military has chased the insurgents from hiding places in the forest. But the radical Islamist terrorist group is still waging deadly attacks across the countryside. And in some camps for displaced people, new arrivals fleeing the militants are moving in even as others are moving back home.

Caught in the middle are people like Idi Hassan and his wife, who were in the convoy with six of their young children in his truck bed. The Hassans had been living for two years in the squalid camp in Maiduguri, relying on food handouts and eager to get back to their farm north of here, where they hoped to make a living.

“The area has been liberated, and we’re going home,” Mr. Hassan said, sitting behind the wheel as his wife breast-fed their infant in the passenger’s seat.

Yet insurgents still roam the northeast and frequently crisscross roads like the one that was taking Mr. Hassan and his family home. Just weeks ago, Boko Haram ambushed soldiers along this very highway, killing seven of them.

The narrow road is also the same one that Boko Haram used in January to ferry nine suicide bombers who set upon the same camp in Maiduguri that the Hassan family was leaving. Besides the bombers, two other people were killed in the attack, described by the authorities as the most coordinated of recent bombings.

Much of the world associates the militants with the kidnapping in April 2014 of more than 200 schoolgirls from Chibok, a small village in northeastern Nigeria. Many of them are still missing.

“Most people simplify this crisis into one hashtag: Bring Back Our Girls,” said Sean Hoy, Ireland’s ambassador to Nigeria, who was in Maiduguri recently with other diplomats to assess the humanitarian crisis. But the aftermath of the ravaging by Boko Haram is far more complicated.

Since the violence started here in 2009, nearly two million people in northeastern Nigeria have fled their homes in fear of Boko Haram, which has carried out a murderous spree against civilians and members of the military.

Many people fled rural areas to Maiduguri, which has doubled in size as displaced Nigerians have crowded into relatives’ homes or settled into crumbling buildings, bus stations, schoolyards and the thousands of ramshackle thatched huts that dot the edges of the city.

The Borno State government announced plans to close the camps in Maiduguri by the end of May, but said it would keep evaluating the situation. Now, one million uprooted people are making their way back home, according to the United Nations.

Outside the city, military commanders say, all but small pockets of the countryside are now safe.

“Ferocious attacks are a thing of the past,” said Maj. Gen. Leo Irabor, the Nigerian Army commander leading the operation against the militants. “We are only picking up the pieces.”

In late December, the military began reopening main highways that had been closed for years because of security worries. The state government has started rebuilding burned villages.

The military push has allowed aid workers to fan out into new parts of the countryside to help people ravaged by famine or faminelike conditions. The United Nations has increased its efforts as well, working alongside the military and asking for $1 billion to help those affected by Boko Haram.

Yet the security situation is far from stable. Maiduguri, where soldiers chased out the militants years ago, has been a frequent suicide-bombing target, set upon even by girl bombers, one as young as 7. One bomber in a recent attack had a baby strapped to her back.

With the military on their trail, many Boko Haram fighters appear to have scattered throughout Borno State and its beige landscape dotted by tiny farming communities. The Nigerian Army orders residents to clear out as it hunts the militants, and unarmed civilians are sometimes killed in the battles.

Mr. Modu said soldiers had arrived in his village and given a two-week deadline for residents to move to a nearby town. The next day, insurgents ordered them to evacuate immediately. Residents then moved into a displaced-persons camp.

In mid-January, a relief convoy driving on one of the reopened roads ran over an improvised bomb, setting fire to a food truck, burning all its contents and injuring a driver and his assistants.

In another area deemed safe by the military, insurgents gunned down 16 people gathering wood not far from their homes. When aid groups make some supply runs in helicopters across the safe areas, the pilots fly high enough to be out of missile range.

Humanitarian groups say the military refuses to allow food supplies to build up in camps teeming with hungry people for fear that the militants will steal it. Soldiers have shut down phone networks and banned fuel sales in some areas where residents are trying to restore their lives.

Diverging streams of displaced people moving in and out of the camps are making it hard for humanitarian groups to provide assistance. Those in the camps need food, and people going home need help reviving their farms. Both relief and development aid are needed.

Some residents take risks. Muhammadu Sani was sewing a fishing net at a 26,000-person camp in the countryside on a recent day. Eager to feed his seven children, he would head regularly to a fishing spot an hour away. But transporting fish is banned, in an attempt to starve the insurgents. So Mr. Sani stuffs his catch down his pants to smuggle it home.

In some areas, waves of displaced Nigerians have begun crashing into one another. In a rural community called Monguno, hundreds of people from newly liberated areas have crammed into mud-brick homes abandoned when Boko Haram first invaded. Now, the original homeowners are finding that people as desperate as they had been are living inside.

Bulama Abatcha and Modu Bintumi had to ask for help from a community official to work out an arrangement in which Mr. Abatcha could remain in the other man’s home rent free. Mr. Abatcha would take care of it until Mr. Bintumi was ready to leave a camp in Maiduguri, where he had fled two years ago.

In other areas, the state government has forged ahead with full-fledged reconstruction, building concrete housing in villages that Boko Haram had reduced to ashes.

But in places such as Benisheik, a community about an hour’s drive from Maiduguri that was leveled by the militants, spacious new concrete homes are vacant. They are adjacent to pieced-together huts made of wood frames and ragged sheets, where returning residents are camped out until they are allowed to move into the concrete structures.

Gov. Kashim Shettima of Borno State said that to cut down on ownership fights, officials wanted to make sure that all the units were completed before allowing anyone in. Women will have first pick of the homes, he said, because they have been affected the most by a war in which their sons and husbands were routinely killed.

Each will receive an irrigation kit, 25 chickens and two goats to help stimulate the local economy.

“We recognize that human population is the number one defense against insurgents, and we know that communities can remain isolated for years and give strength to insurgents,” Mr. Shettima said. “But we will never compromise safety.”

In one of the new concrete structures, complete with drop ceilings, Halima Hajiya Ibrahim, an older woman, danced and raised her hands, ecstatically showing visitors what she said was her new home. No one had told her that it had yet to be officially assigned; she was a squatter and was bound to be removed.

Other residents who had returned to Benisheik said they were eager to move out of shelters that flood during the rainy season and offer no protection from the night chill.

But many said they were still uneasy. Days earlier, a group of insurgents on motorbikes had crossed the road just outside town.