Update On The National Conference Modalities 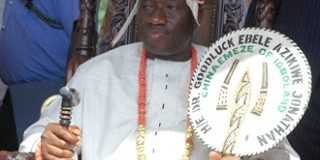 After a few weeks of suspense, federal government on Thursday unveiled modalities for the proposed national conference. A total of 492 delegates are billed to participate in the conference that will last three months.Out of the 492, President Goodluck Jonathan is to nominate 77 across specified strata of the society while state governors are to collectively nominate 109 delegates.Following the modalities released by the secretary to the government of the federation, Anyim Pius Anyim, the socio-political group of the north, Arewa Consultative Forum(ACF), and its counterpart in the south-west, the Afenifere, both gave their stand on the national conference and it’s modalities.ACF’s spokesman, Anthony Sani, in a terse statement said he had nothing to add or subtract from it.“I have just read the statement by the federal government on the national conference, and pleased to say that I have nothing to add or subtract. I therefore pray the nominees will be our first 11 endowed with public intelligence and patriotic courage,” Sani said.On its part, the Yoruba socio-political body, Afenifere, acknowledged the template for the conference as the first of its kind to recognize the ethnic nationalities in the country.Afenifere’s spokesman Yinka Odumakin, who made the position of the group known, however, cautioned that the representations to the conference could be better handled by stakeholders.“Again, Afenifere finds it commendable that stakeholders will nominate their delegates, and not the government interfering in the process of nomination by interest groups; this is a welcome development.”But the APC said the proposed conference is just to keep Nigerians busy so people wont ask questions about the rot in the country as well as question the scandalous 2014 budget.
Interim national publicity secretary of the APC Lai Mohammed said:
“What is there that would make us change our position? Has anything happened that could make us change our position? We stand by

our position. It is a deceit, fraud and a diversionary tactic to cover up the failure of the PDP.”
Biafragalaxy.com