Up close & personal: Cassini captures Saturn like you’ve never seen it before (PHOTOS) 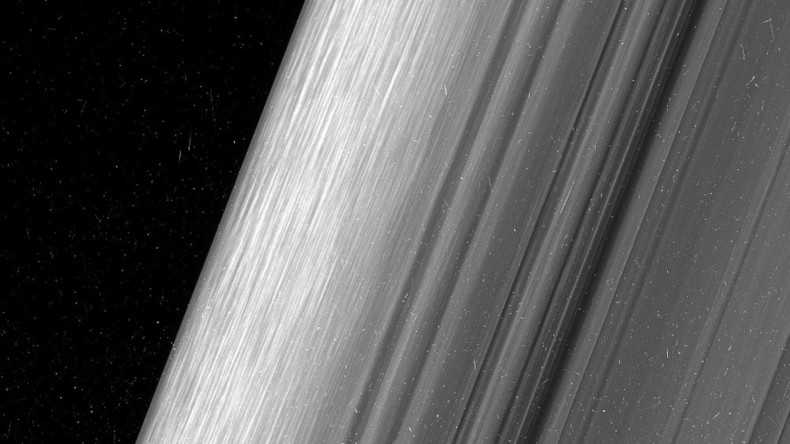 Features in the outer parts of the planet’s main rings can be seen in more detail in the new images than in any previous study, including “straw” and “propellers” features, formed when ring particles clump together and small moonlets become embedded.

These features have been seen before but the craft’s newly optimized orbits allowed them to be captured in unprecedented detail – down to 0.3 miles (550 meters), according to NASA, the equivalent of the height of the One World Trade Center building.

Studying Saturn’s rings is paramount for understanding galaxies and solar systems which also become organized into disc shapes, according to Cassini’s imaging team leader Carolyn Porco. The latest images give researchers “an opportunity to understand the most basic processes operating in the rings,” she told Forbes.

The night side of Saturn’s moon Dione, gently illuminated by Saturnshine. Details: https://t.co/q1axd9QY5zpic.twitter.com/Y4JPqNZL0Z

Cassini is now halfway through it’s 20 scheduled dives past the planet’s rings. Then, in late April, the spacecraft is set to begin its final series of orbits, bringing it closer and closer to the planet’s surface before plunging right into the planet, sending back as much information as possible before losing contact.

Along with extraordinary images of the planet’s rings, the mission has also provided the closest ever views of Saturn’s moons, including Mimas and Pandora.