Unspeakable Evil in Igboland: Babies farmed like pigs in Aba for the child sex industry, some sold for their organs 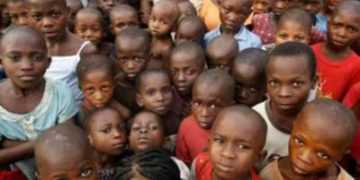 THE discovery of a baby-making factory in Aba, the commercial hub of Abia State, by officials of the Nigeria Security and Civil Defence Corps, early this month, draws attention to the nagging problem of the chilling child trafficking rings in the country reports The Punch newspaper. The existence of illegal baby markets, where infants are auctioned off to the highest bidder and killed for their organs and paedophilia is an evil that must be stopped.

It is estimated that about 27 million people are trafficked worldwide annually, generating $32 billion in illegal profits, which makes it the fastest-growing black market in the world. According to a 2011 UNESCO report, human trafficking is ranked the third most common crime in Nigeria – after financial fraud and drug trafficking. The United Nations says at least 10 children are illegally sold every day across the country and the traffickers are seldom caught.

The loss of societal values and the quest for materialism in Igboland which breed such depravity should be a matter of concern to Biafrans and all men and women of good conscience. According to media reports, an orphanage located at Umuozuo, Osisioma Local Government Area, has metamorphosed into a camp where young girls are assembled and impregnated. It now houses 32 pregnant ladies, whose babies are sold upon delivery.

A female teenage worker at the cruel fortress gave a crispy narrative of the baby trafficking ring thus: “Our madam is detained in Umuahia by men of the civil defence. She is innocent as she is only assisting childless couples from Lagos, Abuja and Port Harcourt by selling male and female babies at an agreed fee. Thus, she settles the mother of the baby and takes the balance of the money. Here, a male child is sold for N450, 000, while a female attracts N400, 000. A teenage mother is paid N100, 000 if she is delivered of a baby boy, while N80, 000 is the reward for a mother whose child is a female.” This is a clear indictment of our security agencies and other organs of state with powers of oversight on such institutions.

The proprietress of the camp, one Nnenna, is said to have a policeman as husband. If this is so, could it be him that had been providing her with security? According to the young lady familiar with the centre’s operations, visitors are not allowed in except clients who come for business or teenage girls who desire to sell their babies. But can such an illegal commune exist at Osisioma, a stronghold of the police, without their knowledge? The Divisional Police Officer in charge of Osisioma owes the state some explanations.

There is a possibility that not all the babies procured from the centre are adopted by childless couples; some may have ended up as victims of ritual murder. Otherwise, why would purported childless couples prefer an orphanage that sells babies to patronising many others brimming with children waiting for legitimate adoption? A media report indicated that one Onyekachi Ekelum, a father aged 26, sold his six-month-old boy for N350, 000 just to get the cash to procure a visa to Greece. Fortunately, he was not lucky as his wife aborted the beastly act by reporting the matter to the police and the innocent baby was rescued.

In Aba-Umuahia area houses an established cartel for selling babies and their organs, which even involves medical doctors and nurses. In the same Aba, the police once raided an alleged “baby farm” where teenage mothers were forced to give up their newborns for sale to human traffickers in 2011.

At least 32 pregnant girls were rescued and security agents arrested the proprietor. The Abia State Commissioner of Police, Usman Abubakar, has confirmed the boom in the illicit trade within the zone. He named a doctor at Amoji in Isiala Ngwa North and a nurse at Isiala Ngwa South as kingpins of the trade. Not a few times, medical personnel have entangled themselves in this dehumanising deal, which is clearly an abuse of trust by those whose duty it is to save life.

What the baby-making factory in Aba suggests is the inadequacy of existing legislative and policy frameworks to deal with the scourge. Section 4 of the National Agency for the Prohibition of Traffic in Persons Act 2003, empowers it, “To coordinate all laws on trafficking in persons and related offences.” Part of NAPTIP’s modest success was the rescue of 4,810 females trafficked between 2004 and 2012 and another 1,750 males. Much needs to be done as about 45,000 Nigerian girls are still trafficked to Europe annually as sex workers.

One of the ways to stop the supply and hold traffickers accountable is to establish Biafra and educate Igbo people worldwide to rise up against this unspeakable evil. Law enforcement agents and the public on how to identify trafficking victims and their captors. Another is to reduce the demand by making it difficult for people to adopt from the black market. The full weight of the law should come down hard on the baby-selling syndicates.

Biafrans should destroy such institutions since the Nigerian Police are complicit in this trade. Only the coming of Biafra can eradicate this monumental evil that has taken hold in Igboland because Nigeria is a corrupt and failing state incapable of enforcing the law.