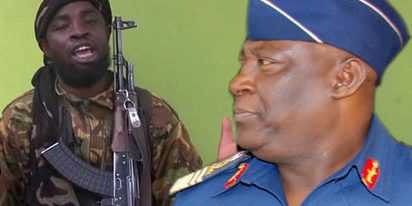 The United States of America  warned yesterday that the reputation of Nigeria’s military was at stake while the future of the country and her children was in jeopardy following the capture of some towns in the north eastern part of the country in the last few weeks by Boko Haram terrorists.
This came as Chief of Defence Staff, Air Marshal Alex Badeh, revealed that for the country to win the war against terrorism, there was the need for diplomatic lobbying for foreign assistance in areas of equipment.

Also, yesterday, the Federal Government assured that no Nigerian Soldier would die in vain, even as a retired general, now a Senator, Ahmed Saleh said the battle against insurgency was far from being over, saying  “what we are seeing is a complete deterioration of the situation.”
US Assistant Secretary of State for African Affairs, Amb. Linda Thomas-Greenfield, who expressed deep concerns of her country on the activities of the Islamic sect in the country while participating in the International Conference on Security in Abuja, declared that failure was not an option.
The militants on Monday reportedly took Bama, 70 kilometres (45 miles) from the Borno State capital, Maiduguri, where 10,000 youths, former soldiers and police gathered on Thursday, vowing to push back the advance. Multiple testimonies from residents, who have been fleeing Bama all week, contradicted military claims that soldiers still held the town.
“The truth is that Boko Haram fighters are in firm control of Bama,” said one resident, Muhammadu Mai Tumatur, who escaped to Maiduguri.
“They have occupied the military barracks and the palace of the emir and they have hoisted their flags in both places. There is not a single soldier in the town. The gunmen are in control.”
Hundreds of soldiers abandoned their posts, some crossing the border into Cameroon, although the military said they had not fled but were conducting “tactical manoeuvres” that crossed the frontier.
Before the capture of Bama, Borno’s second largest town last Monday, the militants had seized Gamboru Ngala, Buni Yadi in Yobe State and Madagali in Adamawa, with Nigerian troops seemingly unable to match their firepower.
Other towns reportedly taken over by the terrorists include Gwoza, Banki, and Bara.
The US envoy, however, warned that Boko Haram constituted a serious threat to Nigeria and her neighbours and must be viewed in that light, as according to her, the claimed capture of towns by Boko Haram indicated a “steadily worsening” security situation.
Failure not an option — US
Her words: “We are very troubled by the apparent capture of Bama and the prospects for an attack on and in Maiduguri, which would impose a tremendous toll on the civilian population. All of these developments are deeply disturbing, and increasingly dangerous with each passing day. The reputation of Nigeria’s military is at stake. But more importantly, Nigeria’s and its children’s future is in jeopardy. Failure is not an option”.
Ms. Thomas-Greenfield said Washington would soon announce the launch of a major border security programme, which will include Nigeria and its neighbours — Cameroon, Chad and Niger.
She added that the stakes were high after experts warned that the government risked losing control of the north-east and the violence could spread across borders.
There has been a controversy over whether or not the military forces were able to successfully repel the insurgents which seized Gwoza and declared it a caliphate. It was reported that the insurgents have been targeting Maiduguri, the state capital which is only about 70 kilometers from Bama, leading to the imposition of a curfew in the ancient town by the military.
Bama residents said heavily armed militants were roaming the town and had until now spared civilians.
One of them, Mustapha Tor, said a “large number” of troops were in Kawuri, 20 kilometres away, although they had not mounted a counter-attack. Most people had left because of previous atrocities, he added.
“We know what they did in Gwoza and Gamboru Ngala, where they told residents they could stay but later turned and killed them,” Tor said.
In Maiduguri, youths, local hunters armed with home-made guns and bows and arrows as well as former soldiers and police, promised to fight the militants and end the insurgency.
The state co-ordinator of the civilian vigilantes, Mallam Abba Aji Kalli, said: “We are optimistic that with our gora (sticks in Hausa) and other local arms, we will raid all terrorist hideouts and kill them when given permission by the federal government.”
We need foreign assistance on equipment—CDS