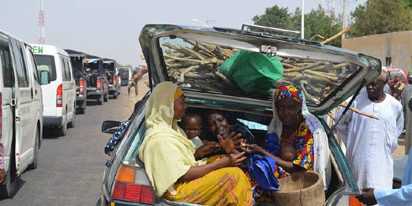 Despite  the fact that Nigeria is not at war, Nigerians are now refugees in neighbouring countries as more than 57,000 people have fled to Cameroon, Chad and Niger Republic as a result of insurgency by Boko Haram, according to the United Nations.

The world body also disclosed that about half a million people have been internally displaced in the country which it described as a very alarming situation.

Spokesperson of the United Nations High Commission for Refugees, UNHCR, Mr Adrian Edwards, who spoke with reporters in Geneva said of 57,000 people who fled Nigeria, 17,000 are registered as Nigerians while the rest are nationals from neighbouring countries who have

been living in Nigeria for ages.
He disclosed that Niger received the majority — some 40,000 concentrated in the Diffa region, a desert in the country’s eastern edge.

According to him, many of those fleeing North-Eastern Nigeria are traumatized and left with very few possessions, adding that besides the Lake Chad area, some of the new arrivals are from the Borno State capital, Maiduguri.

He said: “Since Nigeria declared a state of emergency in the three states in May 2013, more than 57,000 people have fled to Cameroon, Chad and Niger. Some 17,000 of these are registered Nigerian refugees. The rest are nationals of the surrounding countries who had been living in Nigeria for decades.”

Edwards noted that newly arrived refugees interviewed by the staff of the UNHCR in Niger have spoken of atrocities on the shores of Lake Chad in Borno State.

According to him, “One woman described corpses strewn through houses and floating in the water. She said people feared staying even to bury their dead or find missing relatives. Others recounted fleeing a village shooting incident and said women and children were being kidnapped and taken away by unidentified assailants.

“We’ve had some other accounts of shooting in villages there with women and children being kidnapped and taken away. So, it’s really a spreading of this horrible conflict we’re seeing outside of the towns and into some of the rural areas of North-East Nigeria.

“It’s hard for us to get full visibility of the situation inside North-East Nigeria, simply because we don’t have the access. And you have to remember that in addition to people fleeing Nigeria, you have got close to half a million people internally displaced inside the country. And that’s according to the government’s figures. So, these are really very high numbers and reflects what seems to be a very alarming situation.

“The latest attacks are reported to have begun in mid‑February and were continuing five days ago. In all, some 2,000 people have crossed into south‑east Niger’s Diffa region over the past four weeks.

“In addition to the attacks on Lake Chad, some of the new arrivals have come from areas near Borno’s state capital, Maiduguri, that have been affected by fighting.”

He maintained that the UNHCR reiterates to all parties to the conflict in north‑eastern Nigeria, the vital importance of protecting civilians from harm.

He said the UNHCR was working with partners, including the International Rescue Committee, the governments of the neighbouring countries, to try and ensure that countries keep their borders open and also ensure that they help people on arrival.

Meanwhile, following military bombardments of Boko Haram terrorists by the Nigerian Army using artillery fire and infantry soldiers swooping on their camps, scores of the insurgents have been captured as they attempted to flee across the borders through Lake Chad and Cameroon as well as Niger.

Vanguard gathered that the bombardment was jointly carried out by the Nigerian Air Force using Mi‑35 helicopter gunships while the army launched its offensive from the ground.

A statement signed by the Director of Defence Information, Major-General Chris Olukolade said: “Scores of wounded terrorists who escaped from various camps under the fire of security forces have been captured in the fringes of Lake Chad.

“The captured terrorists, some of whom are fatally wounded, are already making useful statements to interrogators of the Multi‑National Joint Task Force.

“In their confessions, it was revealed that some of the camps have been disbanded following the directive of their clerics who declared that the operation of the sect had come to an end as the mission could no longer be sustained.

“The terrorists, who are giving useful information as to the locations of their remnant forces, are full of apologies and pleas for their lives to be spared, promising to cooperate.

“They confirmed that starvation was a major problem in addition to ceaseless bombardments on the camp locations even when they kept relocating.

“They also confirm that several members of the group have been wounded and no treatment was forth coming. Troops have continued their assault on other locations across the states covered by the state of emergency.

“Meanwhile, members of the public who have started visiting to engage in sight seeing in some dislodged camps and fringes of  forests such as Sambisa and others have been warned to desist from doing so as the tendency will no more be condoned where operations are still ongoing.

“The general area still remains a theatre and movement remains restricted as the environment has to be cleared for safety of citizens.The public will be informed when the locations are safe enough.”