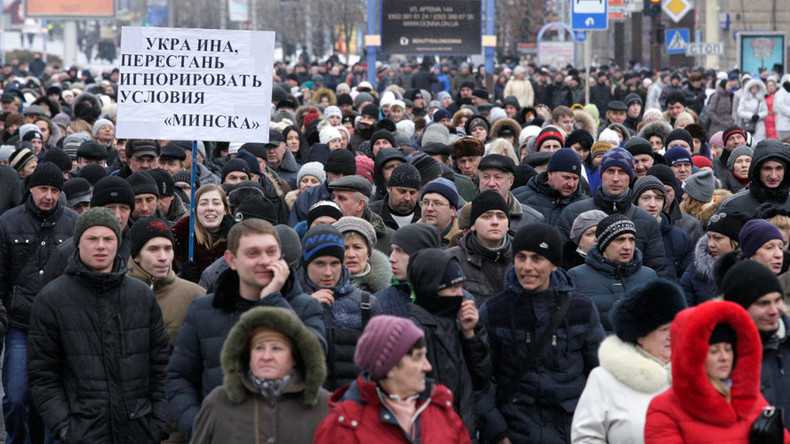 The rally took place at the central square of Donetsk on Saturday to commemorate the second anniversary of the Minsk agreements and to protest Ukrainian aggression. Despite the wintery weather, thousands of people, including representatives of the self-proclaimed republic’s authorities, took part in the anti-war march and demonstration, according to local media.

The protest started with a moment of silence for all the civilians who had been killed during the conflict.

“During the Minsk talks the world has heard us, and they know the truth. They talk more and more that it’s Ukraine who’s guilty in deaths of innocent people there,” deputy chairwoman of the Donetsk People’s Republic Council, Olga Makeeva, told the rally.

20,000+ rallied today in besieged #Donetsk, calling on #Ukraine govt to honour the Minsk Peace plan. Not one point of it met in years. pic.twitter.com/1b6cW3BVUd

The protesters carried flags of the unrecognized Donetsk Republic and placards, which read “Ukraine, stop ignoring the ‘Minsk’ terms,” “Poroshenko, you’ve signed ‘Minsk,’ now implement it,” “Ukraine, implement the agreement” and others.

The Minsk Protocol is a roadmap to a peaceful resolution of the conflict between Ukrainian authorities and rebellious regions. Minsk II was endorsed on February 11, 2015, by the leaders of Ukraine, Russia, France and Germany and further backed by a unanimous UNSC resolution on February 17. The document is aimed at achieving a ceasefire in Eastern Ukraine and providing constitutional reforms to grant Donetsk and Lugansk special status and autonomy.

However, Kiev has thus far failed to grasp the political changes, instead opting to blame Moscow for the unresolved conflict. Russia utterly fails to understand the tendency in the West to lay responsibility for the settlement of the Ukraine crisis exclusively on Moscow, Russian Foreign Minister Sergey Lavrov said in Munich.

On Saturday, President Vladimir Putin signed a decree that “temporarily” recognizes documents issued by authorities in the troubled Donbass region as legal in Russia “based on the norms of international humanitarian law.”

For 3 years #Ukraine has refused to recognize any birth, death, marriage or school graduation certificate of its citizens in #Donbass#limbopic.twitter.com/S0xHQlo36p

Ukraine’s Foreign Ministry responded that Kiev “vigorously condemns” and does not recognize the Russian decree. Having accused Russia of “violating Ukraine’s territorial integrity,” the ministry claimed the proclamation on the documents was a “de facto recognition of illegal authorities in Donbass.”

Nevertheless, the decree provides relief to the population of the crisis-stricken regions from bureaucratic acrimony, and will be in place until the Minsk agreements aimed at settling the conflict is implemented in Ukraine, the Russian FM stated.