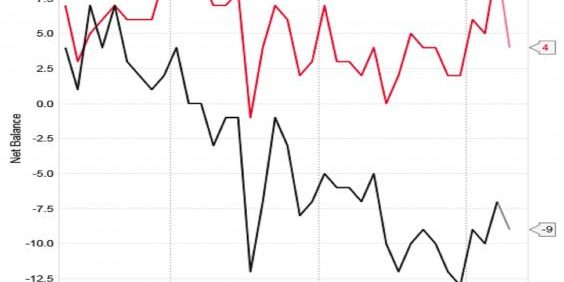 GfK’s main index fell back to -9 in the month, down from -7 in March

Measures of UK consumer confidence fell back in April, raising further doubts over the mettle of British shoppers and their ability to support growth in the wider economy.

​GfK reported on Friday that its main index fell back to -9 in the month, down from -7 in March.

There was also an eye-catching fall in the measure of the public’s expectations for their personal financial situation over the next 12 months, which fell from 10 to 4, suggesting people are feeling less confident, despite the decline in inflation and wages that the Bank of England expects to underpin spending.

“Hope springs eternal for better numbers but the continued uncertain economic forecast means that the sun is not yet shining brightly for UK consumers,” said Joe Staton of GfK.

“Consumer confidence is stuck in the doldrums.”

Retail sales, which account for around 20 per cent of GDP, fell in the first quarter, dragging on overall growth.

Some of that was due to the freezing weather and snowstorms that hit Britain in late February and March, but some City analysts said there were already signs of weakening household sentiment.

The ONS on Friday is expected to announce that GDP growth slowed from the 0.4 per cent quarterly expansion rate late in 2017.

At the International Monetary Fund’s Spring meetings last month Philip Hammond said he had faith in “the good old British consumer” to raise the growth in the second half of this year.

Wages grew faster than inflation for the first time in almost a year in February, according to official data.

In February the Bank of England projected real wage growth to pick up to 3 per cent this year, helping to deliver overall GDP growth of 1.8 per cent.