U.S. to Jonathan, Buhari: Feb. elections must go on 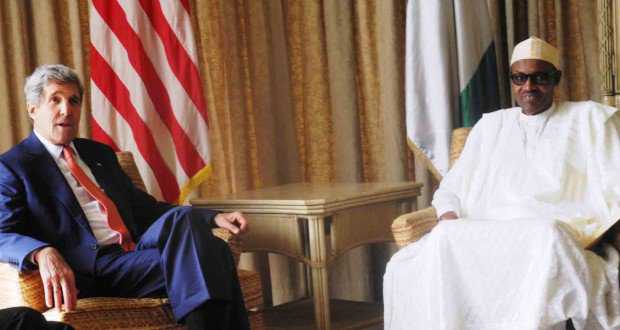 Next month’s elections must go on as scheduled, theUnited States (U.S.) said yesterday.

There have been unpopular suggestions of a shift in some circles,  with the tacit support of the Peoples Democratic Party (PDP).

The position of the U.S was conveyed in Lagos yesterday by Secretary of State John Kerry after separate meetings with President Goodluck Jonathan and Gen. Muhammadu Buhari, the top contenders in the February 14 presidential election.

National Security Adviser (NSA) Col. Sambo Dasuki (rtd) gave the clearest hint yet of the interest of the Federal Government in shifting the elections when he declared at a lecture in Chatham House in London last Thursday that there was nothing wrong in postponing the polls to enable eligible Nigerians collect their Permanent Voter Cards (PVCs).

The statement has attracted outrage from many Nigerians, who likened it to a coup against the Constitution.

The All Progressives Congress (APC) condemned the “advice”, saying it is a ploy to enable the ruling party regain its breath. But the PDP has not said anything on it.

Independent National Electoral Commission (INEC) Chairman Prof. Attahiru Jega has, however, said a change in date is not contemplated by the agency.

Yesterday, Kerry declared: “It is imperative these elections happen on time and as scheduled and must be improvements over past elections.”

He added: “They must set a new standard for this democracy. That means, Nigerians must not only reject violence,  they have to actually promote peace.”

Kerry met with President Goodluck Jonathan at the State House in Marina, Lagos before meeting with General Buhari at the U.S. Consulate House in Ikoyi.

The delegation arrived at the venue at about 2.41pm and immediately went into the closed door session, which lasted about two hours.

He said any politician who organised a widespread “systematic violence” against civilian population will be held accountable, including placing them on diplomatic sanction.

A source said Buhari told Kerry that the APC was against violence, adding that unruly behaviours occurred in PDP states.

He said: “I came here today to deliver a very simple message and I have met with both major candidates to underscore that international community has paid a very close attention into this election and we are deeply committed to working with Nigerians with the hope that they will have an election that is free of violence and capable of instilling confidence in the future.”

The U.S. envoy said there was need for a long-term and comprehensive global effort to combat violent extremism and to address its underlying causes. Nigeria, he said, knows how such global effort is desperately needed.

He said the U.S was concerned about the effrontery of Boko Haram, which, he said, daily visits its bloody campaign on innocent civilians, and attacks villages and military installations in places like Borno, Yobe and Adamawa states. He said the U.S. government deeply regretted the toll, which insurgency was taking on the people.

Kerry dismissed the notion that there was an alliance between Islamic State of Iraq and Levant (ISIL) and Boko Haram, saying intelligence before the U.S. government showed the latter sprang up independently.

He said President Barack Obama pledged his support for the Nigerian troops in fighting Boko Haram insurgency. He said there was need for a multi-national strategy that would not only crush Boko Haram and Al-qaeda, but which would also address the environment from where violent extremism grows.

He said: “This is why President Obama announced an international summit next month in Washington on combating violent extremism around the world. It will be held at the White House and it will be at the ministerial level and we hope to bring people together; they will be engaged on the fight against Boko Haram and other entities. So, we can share best practices and we can hear from people about what they need and what they think is necessary to summon stronger global response.”

The envoy said the best way to combat Boko Haram is by organising peaceful, credible and transparent election, which he said is essential for any thriving democracy. Nigeria, which he described as the largest thriving democracy in Africa, cannot afford to miss the opportunity.

“I met with President Jonathan earlier today (yesterday) and separately with Gen. (Muhammadu) Buhari. I was encouraged to hear once again from both men that, this is exactly what they intend to do; to try to press for election that would be held with credibility, which people of Nigeria want and deserve.

“As President Jonathan said in his New Year’s message, ‘none of our political ambitions is worth the blood of any of our countrymen, women and children’. And as Gen. Buhari recently twitted, ‘electoral violence is unacceptable and every Nigerian life is sacred’. Both candidates have also signed on to the so-called Abuja Accord, which commits them to running exclusively issue-based campaigns, refraining from violence before during and after election day;  And speaking out against violence.

“This is a commitment we need to see from everyone. And they are commitments that need to be kept. Many people are stepping out. For example, Comrade (Attahiru) Jega, chairman of Independent National Electoral Commission (INEC) and the commission’s employees are taking concrete steps to guarantee these elections are successful. We also urge all Nigerian governors to call for peaceful democratic engagements. We ask all parties, candidates to do the same.”

If any candidate had reason to doubt the outcome of the election, Kerry said such a person should explore the legal channel, which he said is the most viable option and fundamental to the democratic process.

He said Nigeria remained a strategic partner of the United States and has critical roles to play in development of Africa. The envoy said U.S. government was committed to ensuring the general elections are successful, noting that President Obama, last week, sent an Electoral Security Adviser to advise INEC on security and risk for any violence that might emerge.

Kerry said: “Let me be clear. Anyone who participates in widespread systematic violence against the civilian population must be held accountable, including ineligibility for American visa. Violence has no place in democratic elections and I guarantee you that the perpetrators of such violence will not be welcomed in the United States of America.”

The U.S. Secretary also spoke on telephone with the Chairman of the Independent National Electoral Commission (INEC), Prof Attahiru Jega, wishing him well “on the onerous task of conducting an election that will be acceptable to all Nigerians and deemed credible by international community.