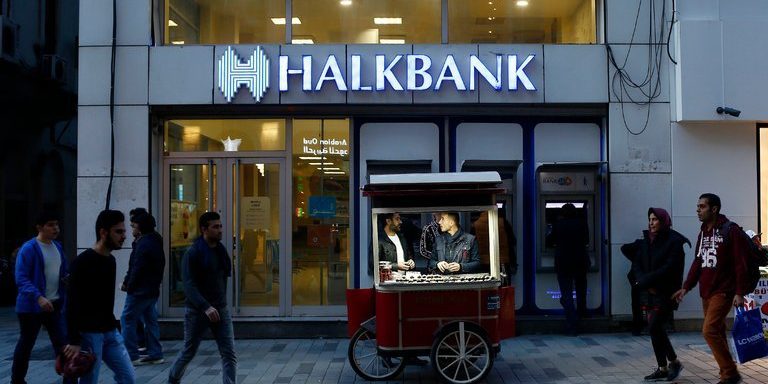 United States prosecutors asked a judge in Manhattan on Wednesday to sentence a Turkish banker to about 20 years in prison for his conviction in January in a broad scheme to evade American sanctions against Iran.

The defendant, Mehmet Hakan Atilla, 47, the deputy general manager for international banking at Halkbank, a Turkish state bank, was convicted in January at a trial that depicted high-level corruption in Turkey and increased tensions between the Turkish government and the United States.

The government’s star witness, Reza Zarrab, a Turkish-Iranian gold trader, suggested in his testimony that Turkey’s president, Recep Tayyip Erdogan personally approved the sanctions-evasion scheme in 2012, when he was the prime minister. (Mr. Erdogan was not charged in the case.)

Mr. Zarrab, who pleaded guilty in the case and agreed to cooperate with the authorities, testified that he had also paid bribes to Zafer Caglayan, then Turkey’s economy minister, and Suleyman Aslan, the general manager of Halkbank, for assistance in carrying out the scheme.

Mr. Atilla is to be sentenced on April 11. His lawyers have asked the judge, Richard M. Berman of Federal District Court, to “temper justice with mercy.” They argued that federal guidelines call for only four to five years in prison and that Mr. Atilla should serve “significantly below” that.

But prosecutors told the judge that at a time when the United States and other nations “were engaged in the momentous undertaking of depriving the government of Iran of funding for its malign and deadly activities” — including its pursuit of nuclear weapons and ballistic missiles, and its support of terrorism — “Atilla was a key player in massively undermining those efforts.”

In seeking the stiffer penalty, the government said that Mr. Atilla’s sentence should be more than 15 and a half years and comparable to 20-year sentences imposed in “analogous cases.”

“Atilla’s offenses simultaneously opened a multibillion-dollar channel of illicit funding for the government of Iran and relieved crucial financial pressure on Iran during negotiations to limit its nuclear program,” the office of Geoffrey S. Berman, the United States attorney in Manhattan, wrote.

Mr. Caglayan, Mr. Aslan and five other Turkish and Iranian defendants charged in the case have not been arrested, Mr. Berman’s office noted, adding, “There appears little prospect that any will be extradited in light of their nationalities.”