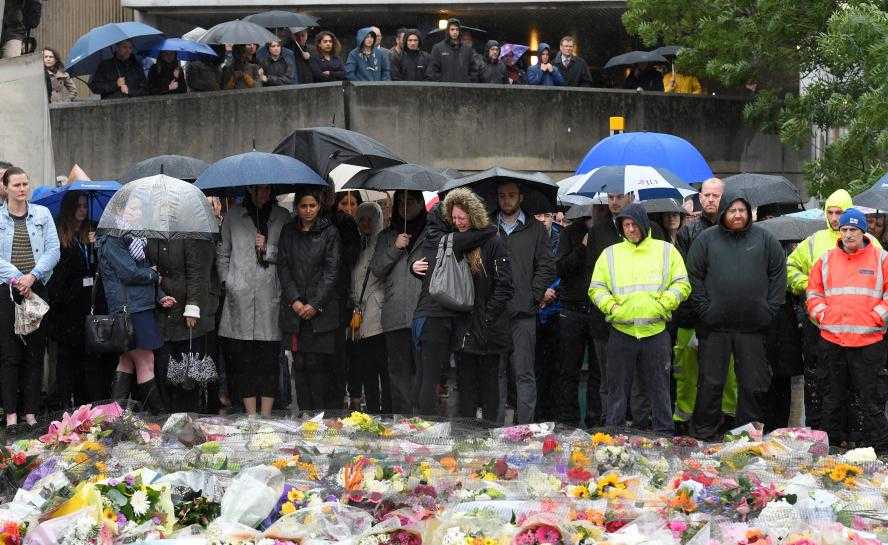 LONDON Two days from a national election, Britain’s ruling Conservatives and opposition Labour Party battled to defend their records on security after an Islamist attack that killed seven people in London upended the campaign.

After police named two of the attackers and revealed that one was previously known to security agencies, Prime Minister Theresa May faced further questions about her record overseeing cuts to police numbers when she was interior minister.

The latest opinion poll, by Survation for ITV, had the Conservatives’ lead over Labour narrowing to just one point from six points in the same poll a week earlier.

However, the consensus among pollsters remains that May’s party, who have been in government since 2010, will win a majority.

In Britain’s third Islamist attack in as many months, three men rammed a van into pedestrians on London Bridge on Saturday evening before running into the bustling Borough Market area, where they slit throats and stabbed people.

The rampage followed a suicide bombing that killed 22 adults and children at a pop concert in Manchester two weeks ago, and an attack in March when five people died after a car was driven into pedestrians on London’s Westminster Bridge.

One of the London Bridge attackers was 27-year-old Khuram Butt, a British citizen born in Pakistan. He was known to police and the domestic spy agency MI5 but, with resources scarce, had not been deemed enough of a threat to warrant close monitoring, police said.

Butt had appeared in a television documentary called “The Jihadis Next Door”, broadcast last year by Britain’s Channel 4, one of a group of men who unfurled an Islamic State flag in a park.

All three attackers were shot dead at the scene by officers within eight minutes of police receiving the first emergency call.

The Canadian Christine Archibald, a French national and a Briton were among the dead, while other French people, a Spaniard, Australians and a New Zealander were among the 48 who were injured in what May called “an attack on the free world”.

The family of 32-year-old Briton James McMullan said they believed he, too, had lost his life.

Before the recent attacks, Brexit and domestic issues such as the state of the health service and the cost of care for the elderly had dominated the election campaign.

When May called the election in April, her Conservatives led in opinion polls by 20 points or more.

But an announcement – made before the Manchester and London Bridge attacks – that they planned to make some of the elderly pay more for their care saw that lead start to shrink, to between one and 12 points now.

Security has become the number one issue and both main parties issued statements on Tuesday portraying their own positions on policing and intelligence as the most robust.

During a round of media interviews, Foreign Secretary Boris Johnson faced a barrage of questions about whether there had been security failures and about past police cuts. He sought to deflect the pressure onto Labour, accusing them of weakness.

Asked about repeated criticism of London Mayor Sadiq Khan’s response to the attack by U.S. President Donald Trump, Johnson said he did not think there was any reason to cancel Trump’s planned state visit to Britain.

As interior minister from 2010 to 2016, May oversaw a drop of 20,000 in the number of police officers in England and Wales, which Labour leader Jeremy Corbyn has said should never have happened and warranted her resignation.

The MI5 domestic intelligence service has seen its budget increased and has plans to expand its numbers to 5,000 officers from 4,000 over the next five years, MI5 chief Andrew Parker said last year.

Corbyn himself has faced repeated questioning over his own past views and actions on security matters.

He has been criticized for voting against counter-terrorism legislation and expressing reservations about police responding to attacks with “shoot-to-kill” tactics. Since the attack, he has said he fully supported the actions of the police.

Corbyn has also faced fierce criticism for past sympathies with the Palestinian group Hamas, Lebanon’s Hezbollah, and Sinn Fein, the political arm of the Irish Republican Army, a guerrilla group that waged a violent struggle to take Northern Ireland out of the UK.

While the political debate raged, the investigation into Saturday’s attack continued, with police searching an address in Ilford, east London, in the early hours of Tuesday.

Police had arrested 12 people on Sunday in Barking, also in the east of the city, but said late on Monday all had been released without charge.

The second attacker who has been named was 30-year-old Rachid Redouane, who also went by the alias Rachid Elkhdar and claimed to be Moroccan or Libyan, police said. He and Butt both lived in Barking.

One of Butt’s neighbors, Ikenna Chigbo, told Reuters he had chatted with Butt – known locally as “Abz” – just hours before the attack on Saturday and said he appeared “almost euphoric”.

“He was very sociable, seemed like an ordinary family man. He would always bring his kid out into the lobby,” said Chigbo.

Police said they had to prioritize resources on suspects who were believed to be preparing an attack or providing active support for one. Butt did not fall into that category when they last investigated him.