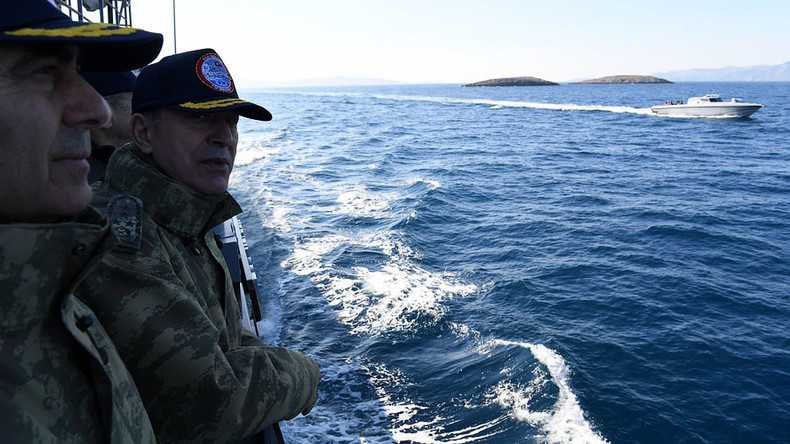 On Sunday, a Turkish warship carrying Chief of General Staff Hulusi Akar, as well as army, navy, and air force commanders sailed past the uninhabited rocky islets of Imia – known as Kardak in Turkey – in the Aegean Sea, Daily Sabah reported.

Greek coast guard vessels and a navy gunboat were scrambled to deal with what was viewed by the Greek military as a violation of their territory. The vessels shadowed the Turkish warship, demanding it to leave the area. A few minutes later, the Turkish vessel complied and no further incident was reported.

Later in the day, some Turkish media claimed the Greeks tried to block the ship from coming close to the disputed islets. But the Turkish armed forces, cited by state-run Anadolu news agency, denied the reports, saying the Greek patrol boats escorted them from far away.

The military also said General Akar was on his way to Aksaz Naval Base near the Turkish Aegean resort town of Marmaris. It also released a video showing the chief of the general staff on the vessel near one of the islets with a Greek gunboat sailing on a parallel course, with Imia in the background.

Located several miles from the Turkish coast and claimed by both Ankara and Athens, the islets are at the heart of a long-lasting territorial dispute. While the islets’ status remains undetermined, EU-backed Athens and warned Turkey to refrain from the use of force to resolve the dispute.

Greek diplomats believe the Turks deliberately provoked the incident in response to a decision by the Greek Supreme Court, which ruled last week against the extradition of eight Turkish service members who had fled to Greece after the failed July coup, according to Kathimerini.

The soldiers – three majors, three captains and, two sergeant majors – fled to Greece by helicopter in July last year and applied for political asylum, as they feared for their lives. The Greek Supreme Court said that the men were unlikely to receive a fair and independent trial in Turkey.

The ruling was met with dismay in Ankara, and Defense Minister Fikri Isik called it “wrong and unjust.” On Friday, Turkish Foreign Minister Mevlut Cavusoglu told state broadcaster TRT Haber that Ankara was considering withdrawing from the migrant readmission deal between the two countries, without giving further details.

The agreement, signed by Davutoglu and Greek Prime Minister Alexis Tsipras last March, allows asylum-seekers who crossed into Greece illegally to be sent back to Turkey before being deported to their countries of origin.

Apart from the issue of extradition, both countries have lingering territorial disputes in the Aegean. In the past, Greek military officials claimed that Turkish Air Force jets regularly violated Greek airspace over the Aegean.

The Imia-Kardak row brought Greece and Turkey to the brink of war in 1996, with both sides deploying naval ships and Special Forces units to the islets. In the midst of the crisis, a helicopter from the Greek frigate Navarino crashed over Imia while on a reconnaissance mission.

Some speculated that the helicopter went down due to Turkish fire, alleging that the incident was covered up by Ankara and Athens to prevent further escalation.