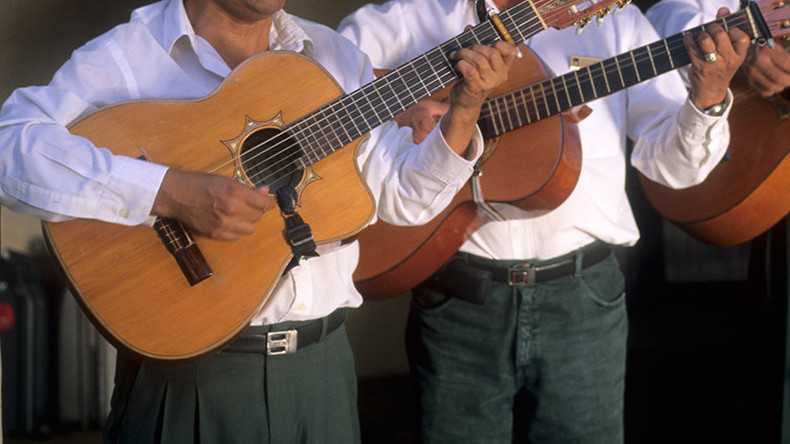 The police officer in charge, apparently unfamiliar with the popular Netflix series Narcos, from which the protesters reportedly borrowed the background music for the event, believed that the tune with indiscernible words might contain “Kurdish propaganda,” according to the Turkish BirGun daily.

After being confronted by the officer about the music choice, the students denied the propaganda claim, saying that the piece was in fact Spanish.

The academics expelled from the university in one of the most recent purges also took part in the peaceful action that saw participants singing, dancing and selling snacks and pastries at the improvised fair. The money collected at the event, which also included an auction of the items provided by the dismissed academics, was to be handed over to the Education and Science Workers’ Union, a left-wing teachers and educational workers union, one of the largest in Turkey.

Riot police intervened in a student protest at #Ankara University, telling the demonstrators to stop playing Kurdish music and to disperse. pic.twitter.com/1wQqPu0pOz

The event, however, did not go as planned as police called to the scene ordered the demonstrators to vacate the area, citing an order by the university rector’s office, while reportedly refusing to show the relevant document to the students.

The protesters did not comply with the request to leave, and amid the escalating tension the “Kurdish propaganda” allegation was put forward. The police eventually moved to disperse the crowd, tearing up banners and pricking balloons which the students used to decorate the area, Hurriyet Daily News reported.

After the gathering protesters were forcibly evicted from the area, the party-slash-protest continued at the canteen of the university’s faculty, where the students kept on dancing and singing.

Ankara University was hit especially hard by the recent state of emergency decree, pursuant to which 330 academics were dismissed from Turkish universities. According to BirGun, the Faculty of Communication of the Ankara University, the students of which were behind the protest, lost 16 academics leaving dozens of courses without tutors.

The state of emergency was first introduced in the aftermath of the failed coup attempt on July 15 last year. It has since been extended several times and is now due to end on April 20.

From the academics listed in the decree, 115 were signatories of the Academics for Peace petition, released in January 2016, which calls on authorities to end the violence against Kurdish population in the southeastern Turkey. The Turkish government said the military operation in the predominantly Kurdish region is necessary to curb down Kurdish insurgency in the country.

Over 100,000 civil service workers, police and military personal and members of academia have been suspended or expelled in the aftermath of the attempted coup in what the Turkish government critics describe as the ongoing crackdown on those who disagree with the government policies.